Islamic State fighters halted an Iraqi army assault on the city of Falluja with a counter-attack at its southern gates on Tuesday, while the United Nations warned of peril for civilians trapped in the city and used by militants as human shields.

The Iraqi army's assault on Falluja has begun what is expected to be one of the biggest battles ever fought against Islamic State, with the government backed by world powers including the United States and Iran, and determined to win back the first major Iraqi city that fell to the group in 2014.

A week after Baghdad announced the start of the assault, its troops advanced in large numbers into the city limits for the first time on Monday, pouring into rural territory on its southern outskirts but stopping short of the main built-up area. 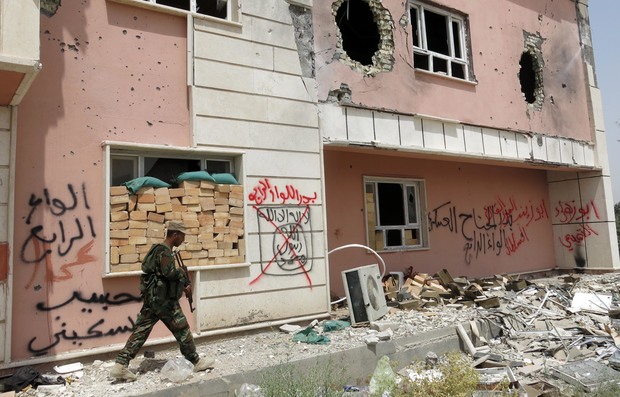 A fighter from a Shiite paramilitary units, known as Hashd Shaabi, walks near a damaged building in Harariyat village on the outskirts of Fallujah. Photo: AFP

Baghdad describes the assault to retake the city as a potential turning point in its US-backed campaign to defeat the ultra-hardline Sunni Muslim militants who rule a self-proclaimed caliphate across much of Iraq and Syria.

Falluja, where US troops fought the biggest battles of their own 2003-2011 occupation against Islamic State's precursors, is the militants' closest bastion to Baghdad, believed to be the base from which they have waged a campaign of suicide bombings on the capital less than an hour's drive away.

Retaking it would give the government control of the main population centres in the fertile Euphrates River valley west of the capital for the first time in more than two years.

But the assault is also a test of the army's ability to capture territory while protecting civilians. Although most of Falluja's population is believed to have fled during six months of siege, 50,000 people are still thought to be trapped inside with limited access to food, water or healthcare.

"A human catastrophe is unfolding in Falluja. Families are caught in the crossfire with no safe way out," said Jan Egeland, Secretary-General of the Norwegian Refugee Council, one of the organisations helping families displaced form the city.

"Warring parties must guarantee civilians safe exit now, before it's too late and more lives are lost," he said.

The United Nations said there were reports that the militants were using several hundred families as human shields in the city centre, a tactic they have employed in other locations in Iraq. It said 3700 people had managed to escape the city in the past week.

"Most people able to get out come from the outskirts of Falluja. For some time militants have been controlling movements, we know civilians have been prevented from fleeing," said Ariane Rummery, spokeswoman for UN refugee agency UNHCR.

"There are also reports from people who left in recent days that they are being required to move with ISIL within Falluja," she said, using an acronym for Islamic State, also known as ISIS or Daesh. 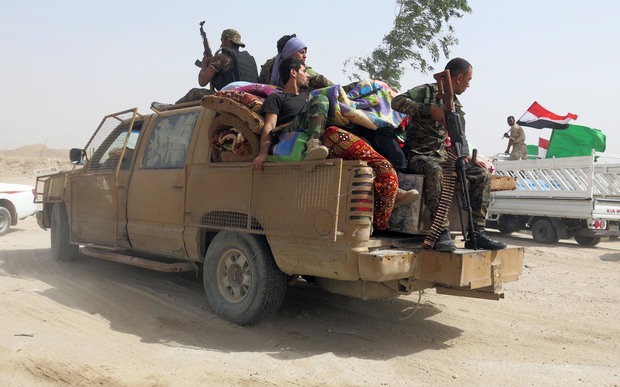 Fighters from a Shiite paramilitary units, known as Hashd Shaabi, sit on a military vehicle on the way to the frontline to fight against Islamic State. Photo: AFP

Soldiers from Iraq's elite Rapid Response Team stopped their advance overnight about 500m from the al-Shuhada district, the southeastern part of city's main built-up area, an army commander and a police officer said.

"Our forces came under heavy fire, they are well dug in in trenches and tunnels," said the commander speaking in Camp Tariq, the rear army base south of Falluja, 50 km (30 miles) west of Baghdad.

Journalists in the area could hear explosions from artillery shelling and air strikes from a U.S.-led coalition supporting the Iraqi forces.

A staff member of Falluja's main hospital said it received reports of 32 civilians killed on Monday. Medical sources had reported that the death toll in the city stood at about 50 - 30 civilians and 20 militants -- during the first week of the offensive which had yet to involve street fighting.

Foreign aid organisations are not present in Falluja but are providing help in camps to those who manage to exit.

Falluja is the second-largest Iraqi city still under control of the militants, after Mosul, their de facto capital in the north that had a pre-war population of about two million.

Prime Minister Haider al-Abadi announced the assault on Falluja on May 22 after a spate of bombings that killed more than 150 people in one week in Baghdad, the worst death toll so far this year. A series of bombings claimed by Islamic State also hit Baghdad on Monday, killing more than 20 people.

In Washington, US officials said the Falluja operation would take time to complete, without giving a timetable.

"The Falluja offensive is tough ... They have faced a lot of heavy fighting in the past couple of days, machine gun fire, artillery fire, not to mention the constant threat of IEDs," Pentagon spokesman Captain Jeff Davis said on Tuesday.

The worsening security situation in the capital has added to political pressure on Mr Abadi, a member of Iraq's Shi'ite majority who is trying to hold a ruling coalition together in the face of public protests against an entrenched political class.

He has called for politicians to set aside their differences and rally behind the army during the Falluja offensive. 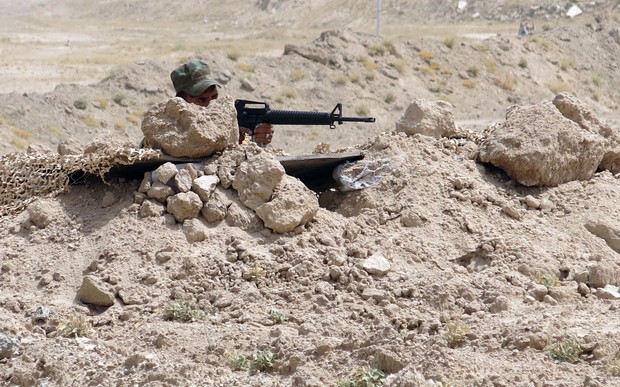 Shi'ite militia groups backed by Iran are also taking part in the offensive against Islamic State, but are holding back from participating in the main assault on Falluja to avoid inflaming sectarian tension.

Journalists saw hundreds of Shi'ite militia fighters rallying at one location near Saqlawiya, a village north of Fallluja still under IS control.

The United States is leading a coalition conducting air strikes in support of the Iraqi government offensive, and says it is having success in rolling back Islamic State.

In neighbouring Syria, US forces have also aided mainly Kurdish fighters who have seized territory from the militants, as has the Russian-backed government of President Bashar al-Assad.

Falluja has been a bastion of the Sunni insurgency that fought both the U.S. occupation of Iraq and the Shi'ite-led Baghdad government that took over after the fall of dictator Saddam Hussein, a Sunni, in 2003.

It would be the third major city in Iraq recaptured by the government after Saddam's home town Tikrit and Ramadi, the capital of Iraq's vast western Anbar province, which also includes Falluja.