The Iraqi army says it has begun an operation to storm Falluja, a bastion of so-called Islamic State (IS) where 50,000 civilians are trapped.

It comes a week after the government launched a concerted effort to retake the city, which has been held by the jihadists since 2014.

An estimated 50,000 civilians are trapped inside, with only a few hundred families escaping so far.

The UN says there are reports of people starving to death there, and of being killed for refusing to fight for IS. 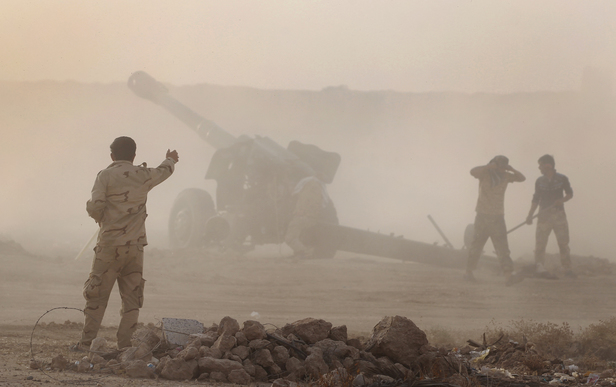 Iraqi Shiite fighters from a Popular Mobilisation unit use mobile artillery near the city of Fallujah. Photo: AFP

State forces including members of an elite counter-terrorism unit are moving into the city on several fronts, an official statement said.

IS fighters are reportedly putting up resistance with suicide and car bombings.

But while the military said it was advancing towards its goals, so far the fighting seems to be centred on IS defences outside Falluja's city limits.

Militia leaders taking part have said there is likely to be a pause before the assault on the city centre begins to allow more civilians to escape.

Falluja fell to IS in January 2014, a key moment in its rise that saw it declare a caliphate across swathes of Iraq and Syria.

Along with Mosul, it is one of two major cities held by IS in Iraq.

Meanwhile there are reports at least 17 people have died in bombings in and around Baghdad.

The deadliest saw at least eight die in a car bombing targeting an army checkpoint in the predominantly Shia area of Shaab.

No group has said it carried out the attack, but IS has frequently targeted Shia Muslims, whom the Sunni militant group regards as apostates.