In a shock move, New Jersey governor and former Republican candidate Chris Christie has announced his support for Donald Trump as US president. 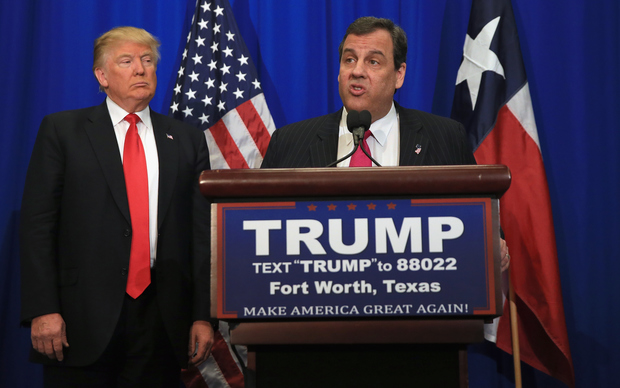 Chris Christie, right, announces his support for Donald Trump during a campaign rally at the Fort Worth Convention Center. Photo: AFP

Mr Christie dropped out of the 2016 presidential race after a lacklustre showing in polls and state races.

"I'm happy to be on the Trump team and I look forward to working with him," Mr Christie said during a press conference.

He said junior senators Ted Cruz and Marco Rubio, both running for president, were "unprepared" for the job.

There is "no question" that Mr Trump would turn around Washington, Mr Christie continued, and keep Democratic candidate and former secretary of state Hillary Clinton from winning the White House.

Frontrunner Donald Trump, a businessman from New York, is leading in many state polls and has already won three consecutive state contests in New Hampshire, Nevada and South Carolina, despite never having worked in politics.

He shouldered some criticism from Mr Rubio and Mr Cruz at a Republican debate on Thursday (Friday NZT) but it was not yet clear whether this had hurt his popularity.

"He is rewriting the playbook of American politics because he's providing strong leadership that is not dependent upon the status quo," Mr Christie said of Mr Trump.

"I will lend my support between now and November in every way that I can for Donald, to help to make this campaign an even better campaign than it's already been."