A blizzard and heavy overnight snowfall doesn't seem to put off voters in the state of New Hampshire, as they hold the first primary in the contest to select the next US president. 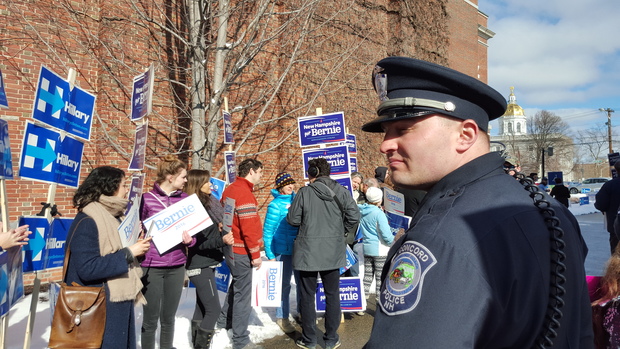 The race to select the Democratic presidential candidate is between Bernie Sanders and Hillary Clinton, and it's a close contest for the Republicans with Donald Trump, defeated in last week's Iowa caucuses by Ted Cruz, polling narrowly in the lead.

In keeping with tradition, some very small towns in the north of New Hampshire, not far from the Canadian border, opened their polling booths at midnight - but the vote only lasted a few minutes.

People in tiny Dixville Notch cast nine votes in all, and the ballot came out in favour of John Kasich for the Republicans and Mr Sanders on the Democrat side.

Most booths, though, opened at 7am local time, with bemused locals being photographed and interviewed on their way into the polling station by reporters keen to see who New Hampshire would end up supporting.

At the Green Street Community Hall, one road back from the main street, a mini-bus arrived bringing elderly voters from a local rest home, and couples and groups of young people filed into the large hall to cast their vote at the polling booth.

At about midday, the path outside started to fill up with Bernie Sanders supporters as word spread he was about to pay a flying visit.

People lined the narrow pathway, stamping their feet to keep warm and breaking out in sporadic chants from the Mr Sanders campaign.

Soon it became the battle of the placards as Mrs Clinton's supporters got wind of the visit and turned up sporting large signs, strategically placing themselves amongst the Mr Sanders' supporters. 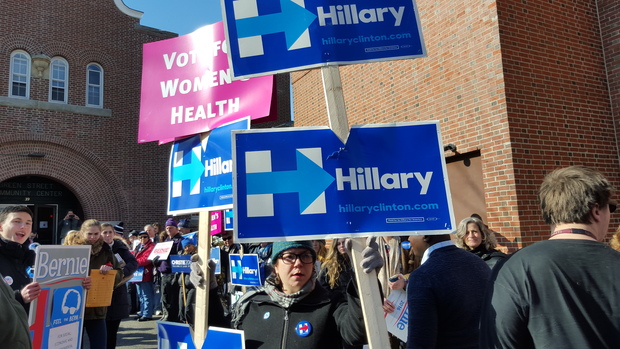 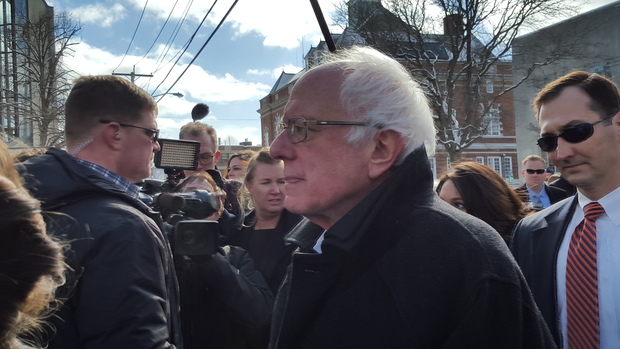 Bernie Sanders, his security and the media on walkabout in Concord. Photo: RNZ / Jane Patterson

The candidate himself, who emerged from a large car and strode down the path in front of the hall, was expected to stop and give a quick speech but instead made for the street and proceeded to walk around the block.

Fifty or so journalists and camera people tripped over themselves to try to get in a few questions but were mostly thwarted by the tight security detail surrounding Mr Sanders.

He was asked about the upcoming fight in Nevada and North Carolina, and about the debate over women being urged to vote for Mrs Clinton to help get a woman into the White House.

The only question he answered was on whether it was nice to be having a walk outdoors; he said it was, and was something he used to enjoy doing regularly, with the obvious inference that quiet walks were no longer a realistic possibility as publicity and media interest around the presidential primaries and his campaign took on greater momentum.

The rolling scrum swept past motorists who could only stop in the street until the way was clear.

Everyone in Mr Sanders' delegation seemed to be taken unawares by the big turnout and throng of media. He had only been out for about three minutes when his security were trying to get him back into the car, but his supporters seemed pretty happy to see him for even a brief time. 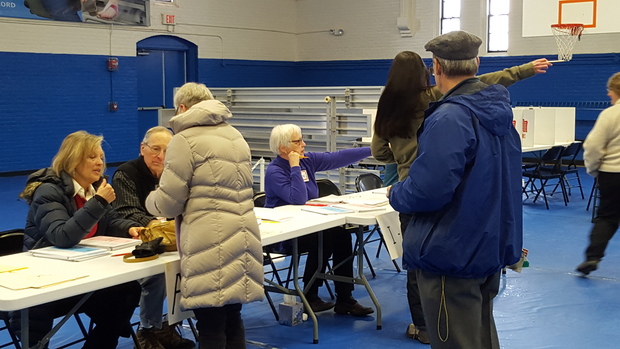 Mr Sanders has a commanding lead over Mrs Clinton in New Hampshire, a state that boasts a large number of independent voters, a factor that could work his favour and on the Republican side could also benefit Donald Trump.

It's a closer race among the Republicans; if the polls are anything to go by Mr Trump has a narrow lead, with the rest of the field likely to fight it out for second and third place.

Jane Patterson's trip has been funded by a grant from the U.S. Department of State. 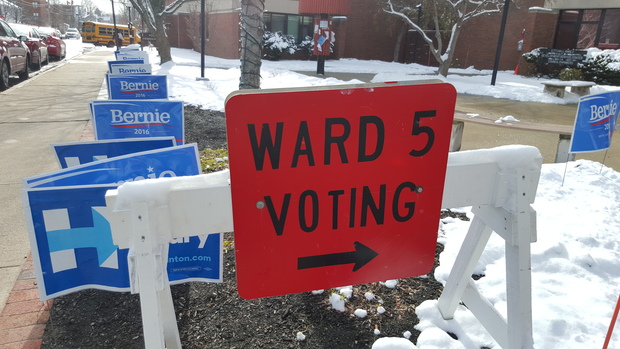