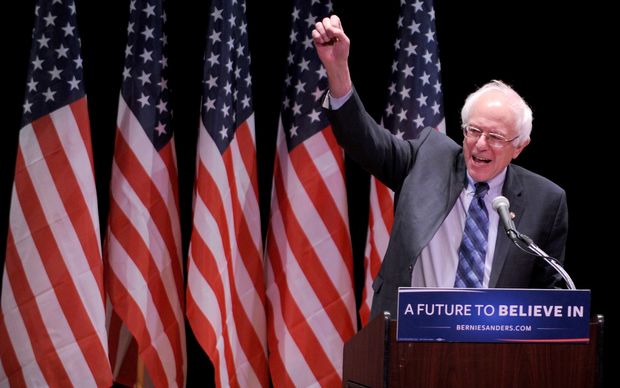 Independent Senator for Vermont Bernie Sanders, 74, is a self-described democratic socialist, has no corporate backers and the mainstream American media largely ignores him.

Despite this, polls show him neck-and-neck with Hilary Clinton in the democratic presidential caucuses of Iowa and New Hampshire.

These are the first two party primary elections to choose delegates for the Democratic and Republican national conventions, from those conventions the presidential nominations are made.

Consequently New Hampshire and Iowa get massive media coverage and that can boost a front-runner - or a lesser-known hopeful.

Barack Obama got a major leg-up on his route to the White House when he beat front-runner Ms Clinton in Iowa in 2008.

Mr Sanders has got to this position by running both an old-fashioned and very modern campaign.

His stump speeches draw crowds that match and exceed those of populist Republican front-runner Donald Trump.

And he has harnessed social media to both spread the word and raise money - a great deal of money too.

He raised $US26 million in the last quarter of 2015, most of it from donations of less than $US25 by individuals. Indeed his fundraising now outstrips Ms Clinton's.

"Bernie Sanders has broken the fundraising record for most contributions at this point in a presidential campaign, surpassing 2.3 million donations", Time reported. 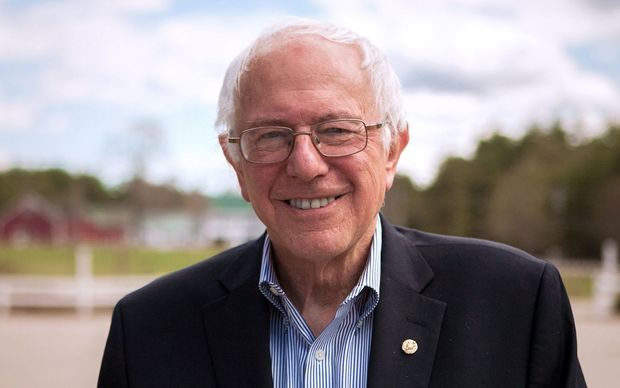 Mr Sanders joined the race in May 2015 as very much a long shot, but he now stands a realistic chance of bagging the Democrat nomination and - what was unthinkable to most a year ago - the presidency itself.

And he has managed this with a virtual media blackout.

While reports on Mr Trump's numerous utterances and Ms Clinton's tightly-managed campaign dominate the US news agenda, Mr Sanders has had barely a look-in.

Media Matters for America used data which tracks network news airtime to show that, excluding debate coverage, Mr Trump had 234 network on-air minutes from January through to the end of November 2015. Mr Sanders had 10 minutes.

Who is Bernie Sanders?

An independent senator from Vermont, Mr Sanders has been in Congress for more than 20 years - but he's running on the Democrat ticket.

Born in Brooklyn, New York, to working class Jewish parents, he attended the University of Chicago and was involved in the anti-war and civil rights movements of the 1960s and 1970s.

Mr Sanders entered politics in 1971, when he ran for Vermont Senate, and his first political win came when he was elected mayor of Burlington, Vermont, in 1980.

He went on to serve four terms as mayor before he was elected to the US House in 1990 - the first independent to manage it in 40 years - and then won a seat in the Senate in 2007. 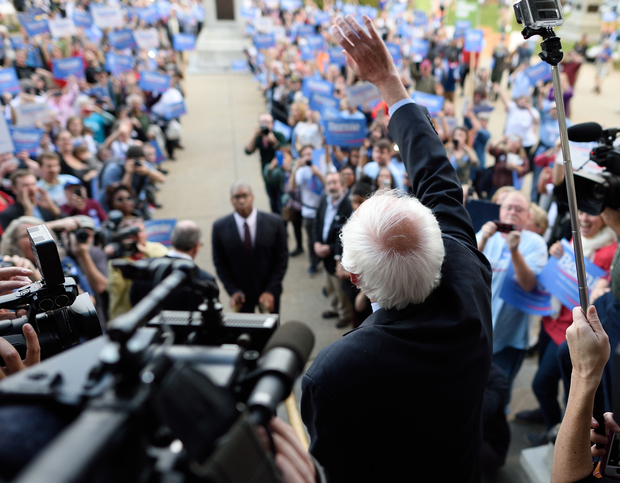 "We not only have massive wealth and income inequality, but a power structure which protects that inequality," Mr Sanders has said.

He talks of "political revolution" and taming the "billionaire class" and income inequality in the US has been a constant theme of his campaign.

Mr Sanders pitches himself as the non-establishment candidate who gives a voice to the disposessed.

He is a vocal critic of the neo-liberal economics that have held sway in the US since Ronald Reagan's presidency in the early 1980s.

This was a system, he said, that had transferred wealth from the poor and middle class to the rich; which he called the "Robin Hood principle in reverse."

Among a raft of campaign tax proposals he plans to stop corporations dodging tax by moving profits offshore and to tax inherited wealth over $US3.5 million.

Wall Street is very much in his sights; he wants to rein in speculators who he said had stripped millions of jobs and wealth from the economy.

He has also proposed a financial transaction tax to curb what he calls risky and unproductive high-speed trading, the proceeds from which would fund his debt-free public college education campaign promise.

He has pledged to provide free, universal, single-payer healthcare, tuition-free college and a $US15 an hour minimum wage. He also opposes the Trans-Pacific Partnership (TPP).

So can Mr Sanders do what UK Opposition leader Jeremy Corbyn did and and come from left field to lead a traditional, mainstream party?

Last year Mr Corbyn was seen as a make-weight when four leadership candidates stood up after Ed Milliband resigned as Labour Party leader.

Mr Corbyn, like Mr Sanders, is an unprepossessing man, in the autumn of his years, with a radical, non-conformist background.

He too ran a grass-roots campaign, eschewed personal attacks on opponents and packed out town hall meetings. He won by a landslide against three centrist, establishment Labour Party figures.

According to a New York Times/CBS News Poll, Ms Clinton's once dominant national position has been eroded by Mr Sanders.

Primary voters under 45 favour him by a 2 to 1 ratio and, according to the poll, nationally, 48 percent of Democratic primary voters support Ms Clinton, while 41 percent back Mr Sanders.

Mr Sanders trailed her by 20 percentage points nationally a month ago.

A Monmouth University poll released on Tuesday showed Ms Clinton with 52 percent of Democratic primary voters and Mr Sanders with 37 percent: a climb of 11 points.

However, Mr Sanders is a long way behind the Democratic front-runner among black and Latino voters, who support Ms Clinton 71 percent versus 21 percent in this poll - a disparity consistent in other polls.

But Ms Clinton can no longer ignore him as a distant rival.

She has gone on the offensive with an advertisement this week attacking Mr Sanders for his attitude towards gun control.

His home state, Vermont, has one of the highest rates of gun ownership in the US, with close to one in two households owning a weapon. And in a recent televised debate in South Carolina she again highlighted legislation which she said showed that Mr Sanders supported the gun lobby. 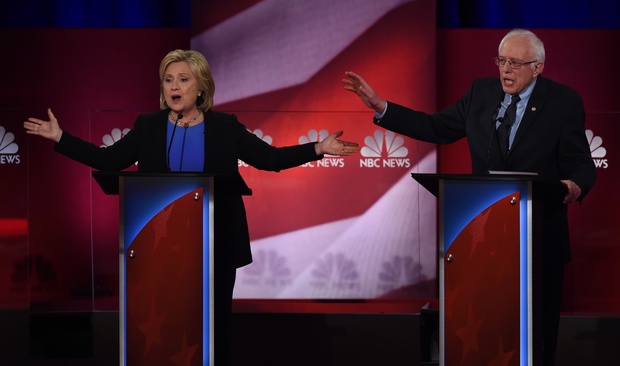 Ms Clinton retains a huge lead with this demographic and her enthusiastic endorsement of Mr Obama in the most recent televised debate was a clear ploy to cement that relationship.

Mr Sanders' supporters hope that he will start to cut through with this group as his campaign gathers momentum. And he has a good story to tell; he marched with Martin Luther King in 1963 and has spent a lifetime supporting civil rights.

History shows the odds are against him, as Time Magazine puts it: "In the history of insurgent versus establishment Democratic presidential candidates - Jerry Brown vs Bill Clinton, Dean vs John Kerry, Bill Bradley vs Al Gore - only one insurgent has won: Obama. That was almost entirely thanks to the African American vote."

So if Mr Sanders does defy history and win the Democrat nomination, how would he go in a straight race against Mr Trump?

There's polling evidence to show he would beat Mr Trump by a larger margin than would Ms Clinton if they went head-to-head for the presidency.

Mr Sanders says he can do this by encouraging those who have "given up on the political process" to vote.

So the long-shot from Vermont could make it to the White House.

He's come this far under the radar and still many Americans know nothing about him. A presidential campaign would change that, but first he has Democrat Party royalty to beat - and that won't be easy.