What is this rise of the political mavericks you speak of? A cutting-edge satirical troupe?

It is the unexpected popularity of a number of figures from the political fringes. In the US, Donald Trump has emerged as a serious contender for the Republican presidential nomination and Bernie Sanders for the Democrats. In Britain, Jeremy Corbyn has won the Labour leadership.

Do three men a movement make?

No. And it's not as though political outsiders or mavericks haven't emerged before. But the trend is wider. Greece's anti-capitalist Syriza movement has just been re-elected; the Scottish National Party and the rightwing populists UKIP have surged in Britain. Across Europe, far-right and anti-European-Union parties continue to make gains.

What do they all have in common?

Let's not overstate the commonalities. They fall at either end of the traditional left-right spectrum, are more or less coherent, more or less populist. Their success depends on a range of specific political, economic and social factors. Trump and Corbyn might both be white men in their 60s, but they are worlds apart.

I'll ask again. What do they have in common?

They tend to be seen as refreshing alternatives to the status quo, to the same old political orthodoxy. Notwithstanding philosophical differences, they share a distaste for globalisation and bewail the ceding of economic sovereignty.

As voters grow disillusioned with politics as usual, with spin, dissembling and bullshit, the mavericks deliver an unvarnished message. What media portray as gaffes, and the utterings of buffoons, are seen by supporters as signs of authenticity. Every time the media lampoon them, they grow stronger.

But if the media depict them as idiots, they're screwed, surely?

Apparently not. On television, they're managing to speak through the hosts directly to the audience. A splintering of media power meanwhile has provided other online mechanisms for messages to be distributed, through social media especially.

Trump has continued to prosper despite various feuds with the pro-Republican Fox News, while Bernie Sanders has filled stadiums and built his base despite media diffidence (in a recent column, the New York Times' public editor, Margaret Sullivan, responded to reader complaints by saying Sanders had not been taken sufficiently seriously by the paper, adding, "The tone of some stories is regrettably dismissive, even mocking at times".)

In Corbyn's case, he prevailed with barely a sniff of mainstream media support, and won a record victory despite a parade of New Labour's Big Beasts - Tony Blair, Peter Mandelson, Gordon Brown, Alastair Campbell and more - pronouncing that he would be a terrible thing.

Despite, or thanks to?

Jeremy Corbyn. Is he the one with the beard?

That's him. A 66-year-old veteran backbencher, the north London MP was a thorn in the side of the Blair and Brown governments, and has voted against his party whip more than 500 times. He was at first regarded as a token candidate for the left fringe, but his arguments for a return to core Labour values - including renationalising the railways, doubling the minimum wage, hiking taxes and scrapping the nuclear deterrent - left his three mainstream opponents looking anodyne. He raced from 100-1 to runaway victor. 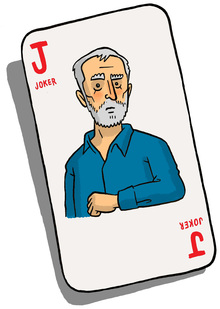 How is he doing so far?

He has assembled a shadow cabinet containing a mix of familiar faces and former backbench allies. The attacks have continued: Prime Minister David Cameron said, under Corbyn, Labour was "a threat to our national security, our economic security and your family's security". A Sunday Times writer called him a "weaponised lentil". He's been assailed for failing to sing the national anthem, failing to attend the Rugby World Cup, for relations with groups such as Hezbollah, Hamas and Sinn Fein, and any other available ghosts of his past.

Like those vicious allegations from the Tory peer about student debauchery?

No, you're thinking of someone else. Corbyn has been a vegetarian since he witnessed animal cruelty at the age of 20, while working on a pig farm. 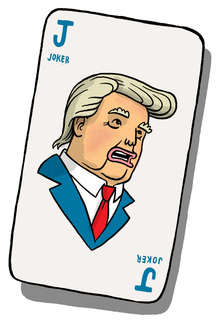 What about Donald Trump. He's the one with the trapdoor hair?

To his acolytes a bold, uncompromising all-American hero, to his critics an unhinged, bigoted human tangelo, Donald Trump has dazzled all before him in the opening act of the US presidential race.

Haven't I read that somewhere before?

Yes. We did him already.

And Bernie Sanders - he's the one that looks like Doc Brown from Back to the Future?

The Vermont senator, like Corbyn a long-serving socialist lawmaker, is putting up a serious challenge to the deep-pocketed frontrunner for the Democratic nomination, Hillary Clinton, with promises of breaking up banks, doubling the minimum wage, and universalising health insurance. While Clinton maintains a healthy poll lead, things are closer in key states, and Sanders is riding a wave of popular support with tens of thousands attending outdoor rallies. 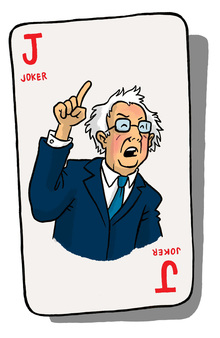 Can they win office?

Trump and Sanders remain some distance from gaining their party nominations ("something like 15-1 or 20-1", says political stats guru Nate Silver), let alone the White House. Relatively few predict Corbyn will become Prime Minister. That said, they've all defied the sceptics and bookmakers so far.

Even if the baubles of office elude them, already the mavericks have shifted their party axes, and delivered a thump to the establishment's solar plexus.

That last answer was 25 words, will that do?

Sure. How about five words?