Bomb equipment and a hoard of weapons have been found at the home of a coupole who killed 14 people at a party in Southern California yesterday, authorities say. 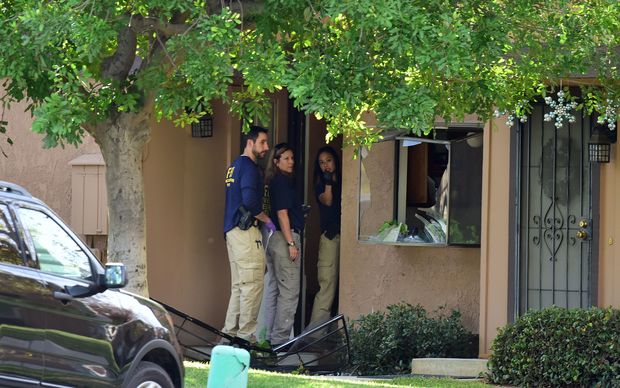 FBI agents investigate at a townhome in Redlands, California, which is linked to the shooting rampage in San Bernardino. Photo: AFP

Law enforcement agencies are still trying to determine if the pair had links to Islamic militant groups but described an arsenal of weaponry found in their home.

Bomb equipment, weapons and thousands of rounds of ammunition were found by police in a raid after a shootout that killed the two suspects.

Authorities still have not found a motive in the attack by Syed Rizwan Farook, 28, and Tashfeen Malik, 27, who opened fire at a social services centre in San Bernadino yesterday.

Police said the nature of the attack, which also left 21 people wounded, indicated there had been "some degree of planning".

San Bernardino Police Chief Jarrod Burguan said it appeared that the duo was prepared to carry out another attack. 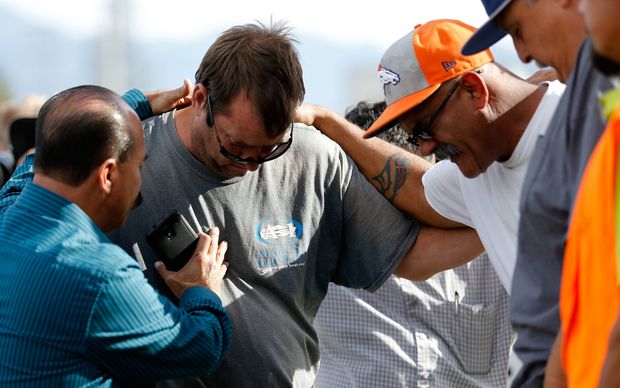 A group of men embrace in prayer outside the crime scene where the suspects in the San Bernardino shooting were killed. Photo: AFP

David Bowdich, assistant director of the FBI's Los Angeles office said there was a mission. "We know that. We do not know why. We don't know if this was the intended target or if there was something that triggered him to do this immediately."

In the shootout with police hours after the attack, Farook and Malik fired 76 rounds of ammunition at the officers and the officers fired 380 rounds back.

Two police officers were injured during the pursuit. 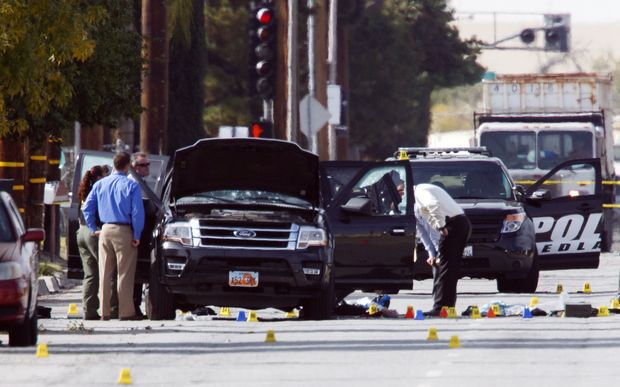 Investigators look at the vehicle involved in a shootout between police and two suspects in San Bernardino. Photo: AFP

Authorities are expected to start releasing the names of the victims today.

Law enforcement officials are also looking at possible "co-conspirators" and have been in touch with the suspects' relatives.

Farook, who was born in the US, was not "on the radar" of law enforcement, Mr Burguan said.

He worked for the past five years as a restaurant inspector for the San Bernardino County Health Department. The Los Angeles Times reported that co-workers said he was a devout Muslim but rarely discussed his religion.

He and Malik were recently married and had a six-month-old baby, who they dropped off at its grandmother's house before the attack.

Yesterday Farook and his colleagues were attending a holiday party at the Inland Regional Centre.

Co-worker Patrick Baccari said he was sitting at the same table as Farook before he abruptly left, leaving his coat.

When the shooting started, Mr Baccari took refuge in a bathroom and was hurt when shrapnel sliced through the wall.

"If I hadn't been in the bathroom, I'd probably be laying dead on the floor," he said.