Ukrainian President Petro Poroshenko has appealed to the West for further backing against pro-Russian rebels, including the supply of weapons. 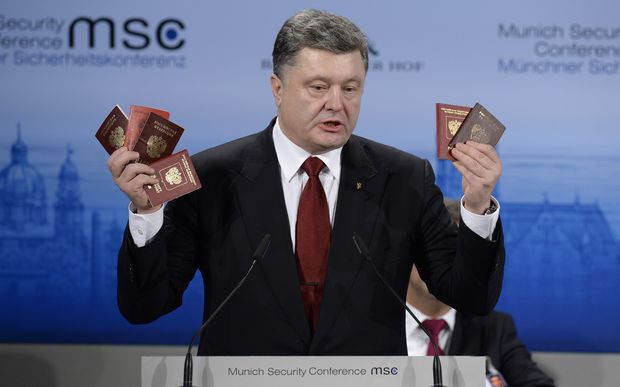 Petro Poroshenko shows passports of Russian soldiers to demonstrate the presence of Russian troops in the Ukraine. Photo: AFP

Mr Poroshenko made the plea at a security conference in Munich, where he brandished passports that he said were those of Russian troops in Ukraine.

It came as the leaders of France and Germany pushed a peace plan to end the conflict.

German Chancellor Angela Merkel and French President Francois Hollande are due to discuss the peace plan with Russian President Vladimir Putin and Ukrainian leader Petro Poroshenko by telephone on Sunday.

The UN says fighting has left nearly 5,400 people dead since April, when the rebels seized a big swathe of the Luhansk and Donetsk regions following Russia's annexation of Crimea.

"We are an independent nation and we have a right to defend our people," Mr Poroshenko told the Munich conference.

Ukraine has "proven to be responsible, that we will not use the defensive equipment to the attack", he said. "The stronger our defence, the more convincing is our diplomatic voice."

The US is said to be considering pleas to send weapons to Ukraine, reports the BBC.

Mrs Merkel, however, said she could not "imagine any situation in which improved equipment for the Ukrainian army leads to President Putin being so impressed that he believes he will lose militarily".

The statement put her in opposition to NATO's top military commander, US Air Force general Philip Breedlove, who told reporters that Western allies should not "preclude out of hand the possibility of the military option".

US Vice-President Joe Biden said the US would "continue to provide Ukraine with security assistance not to encourage war, but to allow Ukraine to defend itself".

Russian Foreign Minister Sergei Lavrov, also speaking in Munich, denounced what he called "growing appeals in the West to... pump Ukraine full with lethal weapons and to involve it in Nato".

Mr Lavrov said he believed there was "every possibility" that the latest peace plan would allow a resolution of the conflict.