The leaders of Russia, France and Germany have held "constructive" talks on efforts to end the conflict in east Ukraine, a Kremlin spokesman says. 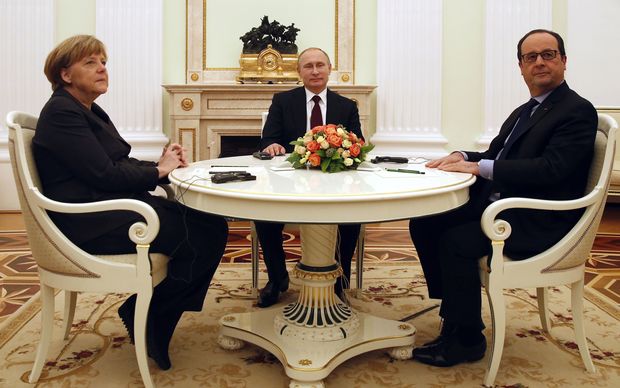 Mr Hollande and Mrs Merkel had brought to Moscow a peace proposal whose details have not been released.

Russia is accused of arming pro-Russian separatists - a claim it denies.

The Kremlin also rejects claims by Ukraine and the West that its regular troops are fighting alongside the rebels in the eastern Donetsk and Luhansk regions.

A September ceasefire, signed in Minsk in Belarus, has failed to stop the violence. Since then the rebels have seized more ground, raising alarm in Kiev and among Ukraine's backers.

The peace proposal Mr Hollande and Mrs Merkel took to Moscow on Friday was crafted with the Ukrainian government on Thursday.

After the two leaders' discussions with President Putin, French officials told AFP news agency they had been "constructive and substantial".

Russia's Dmitry Peskov said work was continuing on a joint document. Further talks will be held by phone on Sunday, he added.

Earlier, Mr Hollande said the aim was not just a ceasefire but a "comprehensive agreement" - although Mrs Merkel said it was "totally open" whether that could be achieved.

Major questions any plan would have to address include the route of any new ceasefire line - given the rebel advances of recent weeks - how to enforce it, and the future status of the conflict zone, says the BBC's Sarah Rainsford in Moscow.

Moscow is still denying any direct role in the conflict, while Kiev insists above all that Ukraine must remain united, our correspondent says.

Meanwhile US Vice-President Joe Biden accused Russia of "continuing to escalate the conflict" and "ignoring every agreement".

He was speaking in Brussels, where he is meeting top EU officials.

He accused Mr Putin of continuing "to call for new peace plans as his tanks roll through the Ukrainian countryside".

He said Russia could "not be allowed to redraw the map of Europe".

Washington is considering Ukrainian pleas for better weaponry to fend off the rebels, raising European fears of an escalation in the conflict and spurring the latest peace bid.