Eastern Ukraine's main rebel leader says he has launched an offensive against the government-held port city of Mariupol. 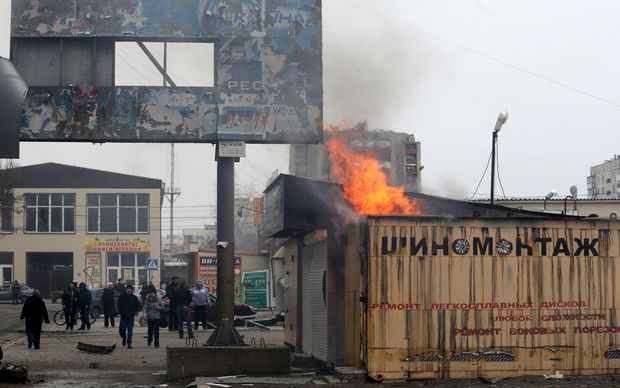 People look at a burning shop after shelling in the southern Ukrainian port city of Mariupol. Photo: AFP

His comments came after a series of rocket attacks which Ukrainian media said had left 27 people dead and many others injured in the city.

Since April, more than 5,000 people have died in fighting in the east.

The rebels seized a large swathe of the Donetsk and Luhansk regions. More than a million people had been displaced.

Rebel leader Alexander Zakharchenko said that he did not want truce talks with Kiev.

A ceasefire was agreed in Minsk in September but never fully took hold. Many hoped that the lower level of hostilities it introduced would last, but the BBC's David Stern says that the fighting is beginning to approach what was seen last summer.

Mariupol has a population of 500,000 and is in a highly strategic position, sitting between rebel-held eastern areas and Crimea, which was annexed by Russia last March. The city saw heavy fighting in August.

"Today an offensive was launched on Mariupol. This will be the best possible monument to all our dead," Alexander Zakharchenko was quoted as saying at a memorial ceremony in Donetsk.

A rebel spokesman earlier denied any involvement in the attack on Mariupol.