Diplomatic efforts are under way to end renewed fighting in eastern Ukraine. 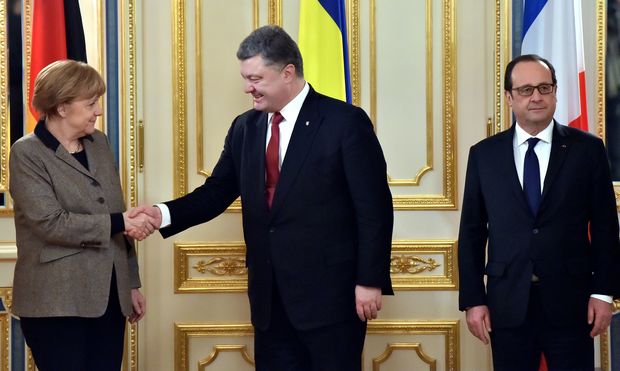 US Secretary of State John Kerry, who is also in Kiev, said the US wanted a diplomatic solution, but would not close its eyes to Russian aggression.

Fighting between Ukrainian forces and pro-Russian rebels has killed more than 5,000 people since last April.

Ukraine and the West have accused Russia of arming rebels in eastern Ukraine and sending regular troops across the border.

Russia denies direct involvement but says some Russian volunteers are fighting alongside the rebels.

Speaking at a joint news conference with Mr Kerry, Ukrainian Prime Minister Arseniy Yatsenyuk said: "We need to get peace. But we will never consider anything that undermines territorial integrity... of Ukraine."

Mr Kerry accused Russia of violating Ukraine's sovereignty, saying that Russia had been acting with "impunity", crossing the Ukrainian border "at will with weapons [and] personnel".

"We are choosing a peaceful solution through diplomacy - but you cannot have a one-sided peace," Mr Kerry said.

He added that Mr Obama was still "reviewing all options", including the possibility of providing "defensive weapons" to Ukraine, due to the dangerous escalation in violence.

The US is currently only providing "non-lethal" assistance.

Russian Foreign Ministry spokesman Alexander Lukashevich said any decision by the US to supply weapons to Ukraine would "inflict colossal damage to Russian-American relations".

Several senior Western officials have also expressed concern at the prospect of US arms being sent to Ukraine.

German Foreign Minister Frank-Walter Steinmeier likened the option to "throwing more weapons on the bonfire", while Nato commander Philip Breedlove said governments must take into account that the move "could trigger a more strident reaction from Russia".