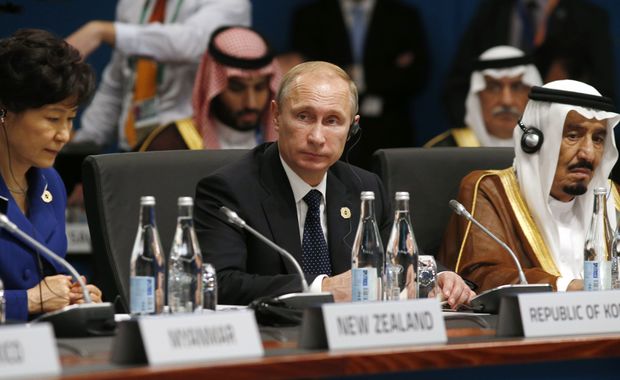 Last night, a member of Mr Putin's delegation in Australia said the Russian leader planned to cut his visit short, under pressure from Western leaders who blasted Moscow for the crisis in eastern Ukraine and threatened more sanctions. 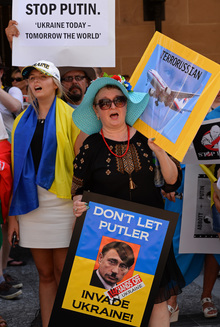 A protest against Russia's actions in Ukraine in Brisbane Photo: AFP

But Mr Putin's spokesperson, Dmitry Peskov, said on Russian radio that Mr Putin would leave when all the work was completed, the ABC reported.

Mr Peskov said Ukraine was a constant focus of negotiations and discussions at the summit were an ordinary and routine situation.

He did not specify whether the Russian leader would attend the summit's final lunch.

'You need to get out of Ukraine'

Russia denied it was involved in a recent escalation of military activity in Ukraine but faced strong rebukes from Western leaders, including US President Barack Obama and Canadian Prime Minister Stephen Harper.

"I guess I'll shake your hand but I have only one thing to say to you: you need to get out of Ukraine," Mr Harper told Mr Putin, according to his spokesman Jason MacDonald.

Mr Putin's response to the comment was not positive, Mr MacDonald said in an email, without elaborating, the ABC reported.

Mr Obama said Russian aggression against Ukraine was a threat to the world while German Chancellor Angela Merkel and British Prime Minister David Cameron hinted at further sanctions if Russia did not withdraw troops and weapons from eastern Ukraine.

Mr Putin's isolation at the summit was also evident with his placing on the outer edge for the formal leaders' photograph.

The order was said to cover the pulling out of services such as schools, hospitals and emergency facilities.

The United Nations said more than 4000 people had died during seven months of fighting between Ukrainian forces and pro-Russian separatists in the region.