The first batch of GlaxoSmithKline (GSK)'s experimental Ebola vaccine has been shipped to West Africa and is expected to arrive in Liberia shortly. 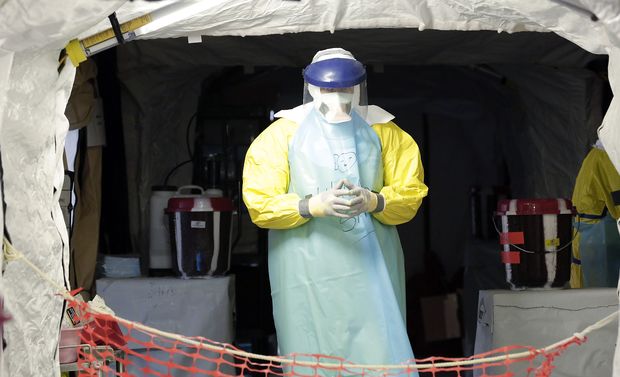 A medic is seen at an Ebola medical unit in Monrovia, Liberia, in December 2014. Photo: AFP

The British drugmaker said the shipment would be used in the first large-scale vaccine trials in coming weeks.

Researchers hope eventually to enrol up to 30,000 people in the trial, a third of whom would get GSK's candidate vaccine.

The vaccine, co-developed by the National Institutes of Health in the United States and Okairos, a biotechnology firm acquired by GSK in 2013, is currently being tested in five small phase one safety trials in Britain, the US, Switzerland and Mali involving around 200 healthy volunteers in total.

"The initial phase one data ... are encouraging and give us confidence to progress to the next phases of clinical testing which will involve the vaccination of thousands of volunteers, including frontline healthcare workers," GSK's Global Vaccines chief Moncef Slaoui said.

The vaccine uses a type of chimpanzee cold virus to deliver safe genetic material from the Zaire strain of Ebola, the strain responsible for the unprecedented West African epidemic.

Data so far show "an acceptable safety profile" including in a West African population and across a range of dose levels, GSK said, adding it had now selected the most appropriate dosage for the Liberia trial.

The World Health Organisation (WHO) has said the Ebola outbreak in West Africa appears to be waning but cautioned against complacency in an epidemic that has seen 21,724 cases reported in nine countries since it started in Guinea a year ago.

Some 8641 people have died, according to WHO data.

Dr Slaoui stressed that GSK's shot, like other candidates from a NewLink Genetics and Merck collaboration, and from Johnson & Johnson and Bavarian Nordic, is still in development and can not be deployed unless and until it proves safe and effective.

"Any potential future use in mass vaccination campaigns will depend on whether the WHO, regulators and other stakeholders are satisfied ... and how quickly large quantities ... can be made."