West Africa's Ebola crisis is likely to last until the end of 2015, says the head of the World Health Organization (WHO) body dealing with the epidemic. 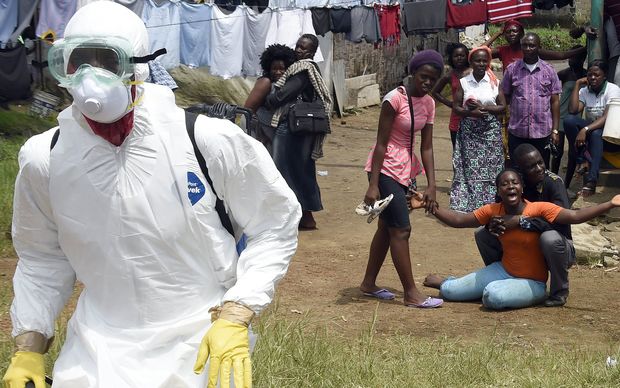 People look on as a woman reacts after her husband is suspected of dying from the Ebola virus. Photo: AFP

Peter Piot, who has just returned from Sierra Leone, told the BBC that he was encouraged by progress there and by the promise of new anti-viral therapies.

But he also warned that vaccines would take time to develop.

The current Ebola outbreak, the deadliest to date, has so far killed more than 7,300 people.

Most of the victims have been in Sierra Leone, Liberia and Guinea.

Prof Piot, one of the scientists who discovered Ebola in 1976, said that even though the outbreak has peaked in Liberia and was likely to peak in Sierra Leone in the next few weeks, the epidemic could have a "very long tail and a bumpy tail".

"The Ebola epidemic is still very much there. People are still dying, new cases are being detected," he told the BBC World Service's Newsday programme.

"We need to be ready for a long effort, a sustained effort [for] probably the rest of 2015."

But he added that he was impressed by the progress that he had seen in Sierra Leone, the BBC reported.

"Treatment centres have now been established across the country with British help. You don't see any longer the scenes where people are dying in the streets," he said.

He also said he was also encouraged that thanks to simple treatments such as intravenous fluids and antibiotics, mortality rates had fallen to as low as one in three.

"Getting it below that will require specific therapies that are now going to be tested," he said, adding that he hoped that within three months it would be clear which anti-viral therapies were effective.

Developing a vaccine would be more complicated, he said, but must be done "so that when there is another epidemic or maybe when this epidemic drags on for a long time, that we have that vaccine available".