Syrian Kurd defenders are engaged in street-to-street fighting with Islamic State fighters who have now entered the town of Kobane on the Syria-Turkey border. 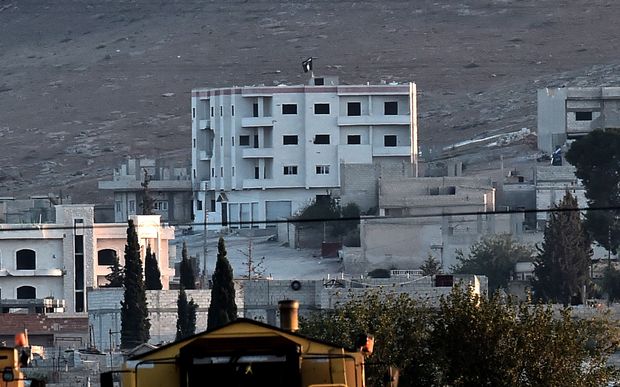 An Islamic State flag flutters on the roof of a building inside the Syrian town of Kobane. Photo: AFP

Hundreds of the remaining civilians were fleeing to the Turkish border after the IS fighters entered eastern districts, raising their black flag on buildings and high ground, the BBC reports.

Taking Kobane, which has been besieged for three weeks, would give IS control of a long stretch of the border.

He confirmed IS was now in control of Mistenur, the strategic hill above the town and that there was heavy shelling. Kobane is now besieged on three sides.

She said: "There is fighting on Kobane's streets now. There are still thousands of civilians in the city and IS is using heavy weapons. If they are not stopped now, there will be a big massacre.

"They have surrounded us almost from every side with their tanks. They have been shelling the city with heavy weapons. Kurdish fighters are resisting as much as they can with the limited weapons they have."

Mustafa Bali, a spokesman for Kurds in Kobane, told Agence France-Presse that 2000 civilians had evacuated on Monday and that all civilians had been ordered to leave.

The US Central Command earlier confirmed a fresh air strike by US-led forces had "destroyed two IS fighting positions south of Kobane" but Ms Abdullah said the strikes in the area were "ineffective".

She said: "[IS has] heavy weapons and tanks, that is why our resistance has limits and we need more air strikes."

More than 160,000 Syrians, mainly Kurds, have fled the town since the IS siege began three weeks ago.

A security analyst, Richard Fontaine, says the decision demonstrates the US has achieved only limited results with air strikes by fighters, bombers and drones.

Another analyst, Christopher Harmer, says it's a significant escalation in the level of risk.

He says fixed-wing aircraft flying at 30-thousand feet are immune from the weapons used by Islamic State, but a low flying helicopter is not and can be shot down with a rocket-propelled grenade or a heavy machine-gun.