American-led air strikes have disrupted Islamic State (IS) militants but the fight against them will take years, a Pentagon spokesperson has told the BBC. 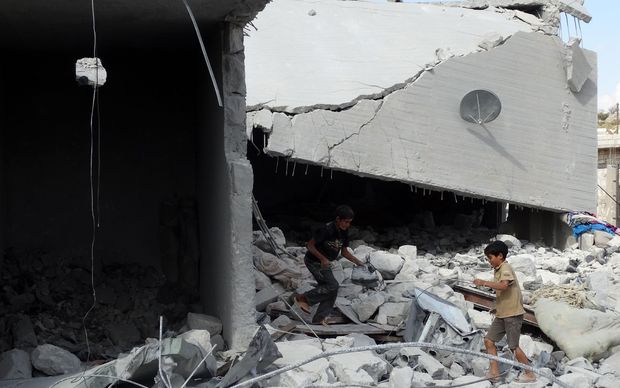 The comments came as activists reported new strikes around the town of Kobane, near Syria's border with Turkey.

Kobane has been besieged by IS fighters for several days, forcing about 130,000 Syrian Kurds to flee into Turkey.

IS has seized large areas of Syria and Iraq, and the US has launched nearly 200 air strikes in Iraq since August.

However, Monday's strikes expanded the anti-IS campaign across the border into Syria for the first time.

Activists say at least 70 IS militants, 50 other al Qaeda-linked fighters and eight civilians were killed in the strikes, which hit multiple targets in the north and east of Syria.

"We think we have hit what we were aiming at," he said.

However, IS was good at adapting and reacting to changes, he said, adding that the group presented a "serious threat" that would not be eliminated "within days or months".

"It's going to take a serious effort by all involved. We do believe that we're talking about years here."

The strikes targeted IS headquarters in its stronghold of Raqqa, north-eastern Syria, as well as training compounds, vehicles and storage facilities in several other areas.

Residents in Raqqa have told journalists that the air strikes have had a big impact on IS fighters.

One activist in Raqqa, Abu Yusef, told AFP news agency that the militants were "focused on trying to save themselves now".

Abo Mohammed, a local resident, told Reuters that the city's main administrative building had been hit by four rockets, and hundreds of fighters who had been controlling traffic and security in the street had gone.

Residents were also "fleeing towards the countryside" to avoid the strikes, he said. "There is an exodus out of Raqqa as we speak."