Intense fighting is being reported between Kurdish militiamen and Islamic State (IS) militants advancing on the northern Syrian town of Kobane. 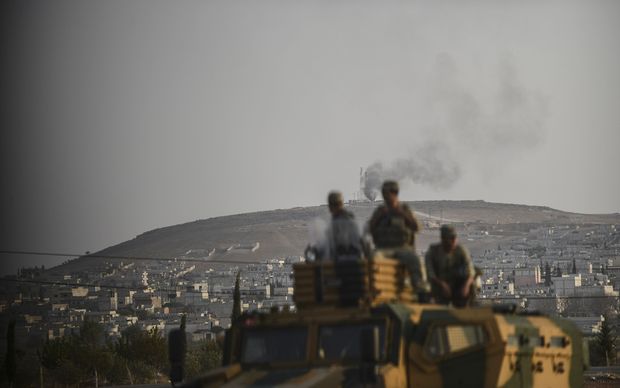 Smoke rises from the Syrian town of Kobane, as Turkish soldiers take position in the southeastern town of Suruc. Photo: AFP

A BBC correspondent across the border in Turkey said mortars were hitting Kobane's eastern outskirts, and reports heavy machine-gun and small arms fire.

IS moved to within 1km of the town despite air strikes seeking to halt its two-week offensive.

Turkey had promised it will do whatever it can to prevent the fall of Kobane.

Prime Minister Ahmet Davutoglu made the vow after the Turkish parliament authorised military operations against militants in Iraq and Syria, as well as the use of Turkish bases by foreign forces.

More than 160,000 Syrians, mainly Kurds, have fled across the border since IS launched an offensive to capture Kobane on 15 September.

In a separate development, IS militants shot down a government helicopter in northern Iraq, the Associated Press quoted Iraqi defence officials as saying.