US-led coalition air strikes have hit Islamic State (IS) targets near the besieged Syrian town of Kobane on the border with Turkey, the Pentagon says. 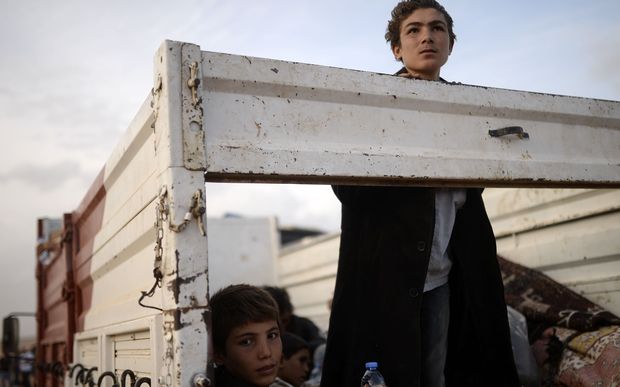 Syrian Kurds fleeing an onslaught by the jihadist Islamic State (IS) group sit in a truck as they cross the Syria Turkey border. Photo: AFP

An IS building and two "armed vehicles" were destroyed at the Kobane border crossing, US Central Command announced.

Other strikes hit IS targets elsewhere in Syria and in northern Iraq.

Kurdish fighters have been defending Kobane against IS since some 140,000 civilians fled the town and surrounding area for Turkey.

IS shelled Kobane yesterday, and several people were killed, the BBC reported.

The coalition air strikes did not appear to prevent skirmishes during the night between IS and the Kurdish defenders.

In the latest coalition action, Saudi, Jordanian and UAE forces joined the US in launching fighter and drone strikes. According to the Pentagon.