The United States-led coalition has targeted oil refineries in Syria during a third night of air strikes against Islamic State (IS) militants. 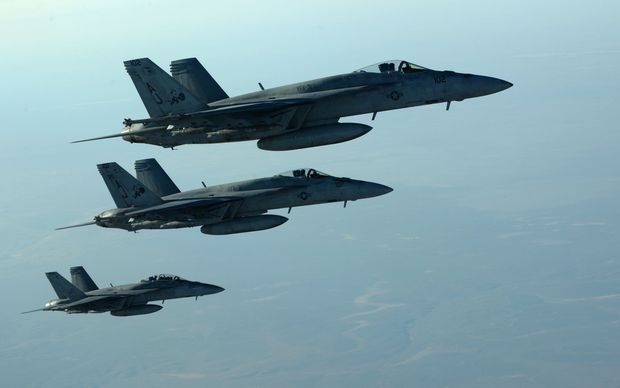 The raids - carried out by US, Saudi and United Arab Emirites aircraft - killed 14 IS fighters and five civilians in eastern Syria, activists said.

The US military said the refineries generated as much as $US2 million per day in revenue for IS.

US President Barack Obama has vowed to dismantle the IS "network of death", the BBC reported.

IS has seized large areas of Syria and Iraq in recent months and controls several oilfields. Sales of smuggled crude oil have helped finance its offensive in both countries.

The US has launched nearly 200 air strikes against the militants in Iraq since August and expanded the operation against IS to Syria on Monday.

On Wednesday, the UN Security Council adopted a binding resolution compelling states to prevent their nationals joining jihadists in Iraq and Syria.

President Obama chaired the session and said nations must prevent the recruitment and financing of foreign fighters.

The US military said the fresh air strikes, using fighter jets and drones, hit "small-scale" refineries that were producing "between 300-500 barrels of refined petroleum per day".

"We are still assessing the outcome of the attack on the refineries, but have initial indications that the strikes were successful," the US Central Command said in a statement.

The British-based Syrian Observatory for Human Rights, an activist group that monitors the Syrian conflict, said the strikes killed 14 IS fighters in Deir al-Zour and five civilians in Hassakeh.