The Turkish government says more than 130,000 Syrian Kurds have crossed the border into Turkey in the past three days, fleeing an advance by Islamic State (IS) militants.

The United Nations said it is the largest number of people to have fled Syria in such a short period since its civil conflict began more than three years ago. 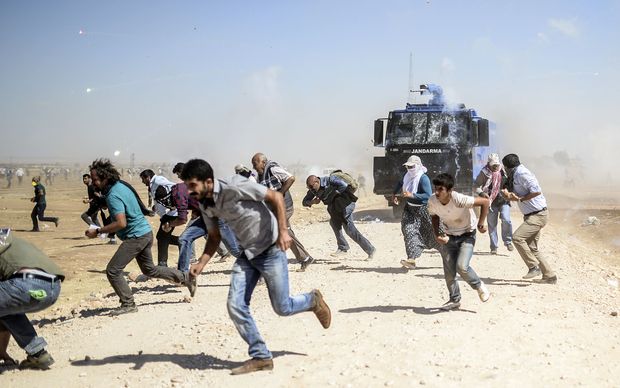 Kurdish protestors clash with Turkish soldiers near the Syrian border after it was temporarily closed by Turkish authorities. Photo: AFP

At the same time, the BBC reports, Turkish security forces have clashed with local Kurdish youths who want to cross the border to help Syrian Kurds defend the key border town of Kobane from IS fighters.

Kurdish forces defending Kobane said IS fighters are using long-range missiles to attack them from a 10 to 15 km distance. Deputy commander of Kurdish forces there said they had managed to recapture a number of villages, but the situation was very dire.

The capture of Kobane, also known as Ayn al-Arabon, would give the jihadists complete control of the area.

Even before the latest influx, Turkey was struggling to cope with more than 1 million Syrian refugees who have crossed into its territory since the uprising against President Bashar al-Assad began more than three years ago.

Carol Batchelor, the UNHCR's envoy in Turkey said that such high numbers of refugees would place a strain on any host community.

She called for "increased solidarity and international assistance" for those flooding across the border. Ms Batchelor said food, blankets and winter clothing - particularly for children - were needed.

"I hope that we are not faced with a more populous refugee wave but if we are, we have taken precautions. If necessary, we have planned how to send these people to safer and further places," he said

Anwar Muslim, president of the Kobane regional government said Kurdish fighters had inflicted heavy casualties on IS and pushed the militants back.

He accused the group of killing women, children and the elderly.

On Friday, Turkey opened a 30km section of its south-west border to Syrian Kurds fleeing Kobane.