Thirty countries have pledged to help Iraq fight Islamic State (IS) extremists by all means necessary. 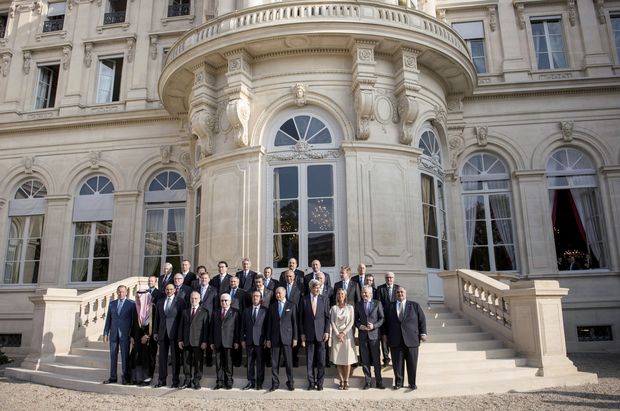 Foreign ministers and leaders at the International Conference on Peace and Security in Iraq in Paris. Photo: AFP

A joint statement by foreign ministers taking part in a major conference in Paris said support would include what they called appropriate military assistance, the BBC reported.

The talks had been called to agree a strategy to combat the group, which controls large parts of Iraq and Syria.

The meeting followed a whirlwind tour of the Middle East by United States Secretary of State John Kerry.

Mr Kerry, who attended the summit, has been drumming up support for a plan of action unveiled by President Barack Obama last week.

The Central Intelligence Agency estimates that Islamic State has between 20,000 and 31,000 fighters in Iraq and Syria.

The murder of British aid worker David Haines by IS militants, shown in a video released by the group on Saturday, has added momentum to the plans, the BBC said.

"If this intervention and support to Iraq is late, that means that Islamic State could occupy more territory and the threat it poses will be even bigger," he said.

The summit declaration said participants were "committed to supporting the new Iraqi government in its fight... by any means necessary, including appropriate military assistance".

Iraqi Foreign Minister Ibrahim Jafari welcomed the decision but also said he regretted that Iran was not present at the Paris talks.

Last week, Mr Kerry ruled out co-operation with Iran citing its "engagement in Syria and elsewhere".

But Iranian Supreme Leader Ayatollah Ali Khamenei claimed on Monday the US had requested Iran's co-operation via the US Ambassador to Iraq.

"I said no, because they have dirty hands," he said. He added the US was seeking seeking a "pretext to do in Iraq and Syria what it already does in Pakistan - bomb anywhere without authorisation".

Syria also did not take part in the Paris gathering.