Dutch experts say Malaysia Airlines flight MH17 broke up in mid-air after being hit by "numerous objects" that "pierced the plane at high speed over eastern Ukraine.

A preliminary report released by the Dutch Safety Board today said there is "no evidence of technical or human error".

All 298 people on board, most of them from the Netherlands, died when the plane came down on 18 July, amid reports it was shot down by pro-Russian rebels. But the search for evidence has been hampered by heavy fighting in the area. 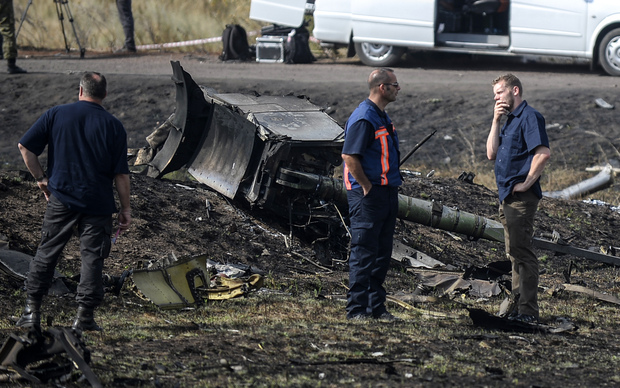 Investigators at the crash site were hampered by heavy fighting in the area. Photo: AFP

The Malaysia Airlines Boeing 777 was flying from Amsterdam to Kuala Lumpur when it crashed between Krasni Luch in Luhansk region and Shakhtarsk in the region of Donetsk.

A separate criminal investigation is being conducted by prosecutors in The Hague, the BBC reports.

They said the Boeing 777-200 was airworthy when it took off from Amsterdam and "broke up in the air probably as the result of structural damage caused by a large number of high-velocity objects that penetrated the aircraft from outside."

The cockpit voice recorder revealed no signs of any technical faults or an emergency situation, the experts said.

While it is not the final report into the crash, Tuesday's findings are significant because they will be the first official account of what happened, the BBC reports. However, it will not attribute blame or liability for the crash.

Experts from Britain, Germany, Australia, Malaysia, the US, Ukraine and Russia are collaborating on the case. The board says it expects the final report to be published within a year.

Ukraine's government and several Western leaders say there is strong evidence that pro-Russian separatists shot down the plane with an anti-aircraft system known as Buk. Russia has consistently denied allegations that it had supplied any missiles or weapons to the rebels.