The first remains of the 43 Malaysians killed in the MH17 disaster have returned home to a national day of mourning.

A special Malaysia Airlines flight from Amsterdam touched down shortly before 10am (local time) today, bearing the remains of 20 people killed when the plane was shot out of the sky over war-torn eastern Ukraine on 17 July this year. 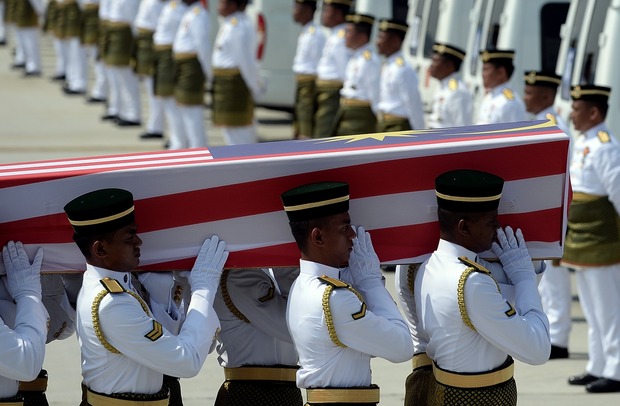 Soldiers carry a coffin with the remains of a Malaysian victim of the Malaysia Airlines flight MH17 crash during a ceremony at Kuala Lumpur International Airport. Photo: AFP

The observance was to be followed by a nationwide minute of silence expected to bring its busy streets, schools and businesses to a standstill across the country of 28 million, while flags nationwide flew at half-mast, AFP reports.

Authorities had earlier asked citizens of the Muslim-majority country to refrain from festive activities and don black out of respect for the victims.

Commuters streaming into the bustling streets of the capital Kuala Lumpur earlier in the morning were overwhelming black-clad, while state television aired recitations from the Koran and flashed photos of the Malaysian victims.

The flight arrived from Amsterdam, where remains have been taken for identification by Dutch authorities, who are leading investigations into the disaster.

All 298 on board the Amsterdam to Kuala Lumpur flight were killed, including 193 Dutch nationals.

The national day of mourning was the first ever to be held by Malaysia for ordinary citizens. Such observances had previously been held on the deaths of some kings and other leaders.

The tragedy compounded the country's grief over the troubling and still-unexplained disappearance of Malaysia Airlines flight MH370 on 8 March this year.

Malaysia has said 30 of its citizens on board MH17 had so far been identified. Further remains will return in the coming days.