Forensics experts in the Netherlands, including three New Zealanders, are expected to begin the formal process soon of identifying bodies recovered from the Malaysian airliner shot down in Ukraine. 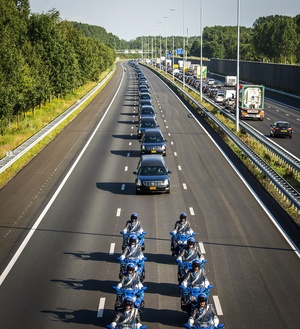 The first 40 coffins were flown to a military airbase in Eindhoven on Wednesday, and the remains of another 74 people will arive on Thursday.

Flight MH17 was shot down in an area held by pro-Russia rebels on 17 July, killing all 298 people on board, including 193 Dutch. The Malaysian Airlines plane had taken off from Amsterdam and was en route to Kuala Lumpur when it crashed in an area of eastern Ukraine after apparently being hit by a missile.

The process of identifying the dead was due to begin on Thursday at a barracks, south of the city of Hilversum.

A team of Dutch forensic scientists working inside a military base will examine the contents of the coffins, the BBC reports. Two more transport aircraft will land in the afternoon and will be met by a band playing the Last Post, followed by a minute's silence.

The process of moving the bodies from the crash site and out of Ukraine is expected to continue at least until Friday.

But there remains a discrepancy in the numbers of bodies counted by observers, and experts warn that it could be months before all victims are identified.

New Zealand had offered help to the Interpol Secretariat General Headquarters in Lyon, France, which is co-ordinating the identification process.

Superintendent Barry Taylor said on Thursday that police have sent three Disaster Victim Identification specialists to the Netherlands. They are expected to stay for three weeks, with the possibility of a second three-week rotation with other staff after that, Radio New Zealand reports.

Mr Taylor said identifying victims is a slow and meticulous process that requires a lot of attention to detail, and staff have to be very clear and confident that the victims they're returning to families are the right people.

New Zealand police had internationally recognised expertise in this field, gained through events such as work in Thailand following the Boxing Day tsunami, bushfires in the Australian state of Victoria and the devastating Christchurch earthquake in 2011, he said.