The Ngā Manu Kōrero national speech competition has highlighted the mana, resilience and eloquence of rangatahi Māori around the country. 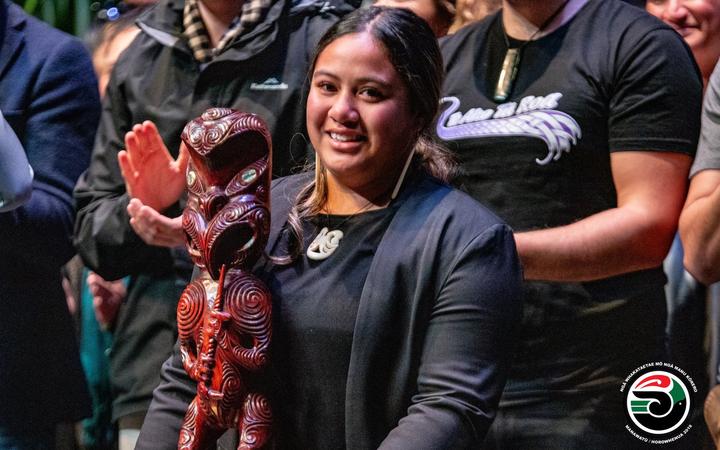 Four victors have emerged from the secondary school contest held in Palmerston North on Wednesday and Thursday this week, during Te Wiki o te reo Māori.

The Regent Theatre erupted and everyone rose to their feet on Thursday afternoon as hometown hero Hinewai Netana-Williams was named best senior Māori speaker at the coveted awards.

With the prestigious Pei Te Hurinui Jones trophy at her side, Ms Netana-Williams, of Manukura School, was speechless.

"Nothing - nothing is going through my head," she laughed.

Ms Netana-Williams was overcome with emotion on stage, and tributes were paid to her father, who passed away in recent months.

"I know my dad would be proud of me."

The Korimako trophy for overall Senior English winner went to Manaia Sorenson from Te Kura o te Whānau a Apanui in the Bay of Plenty. 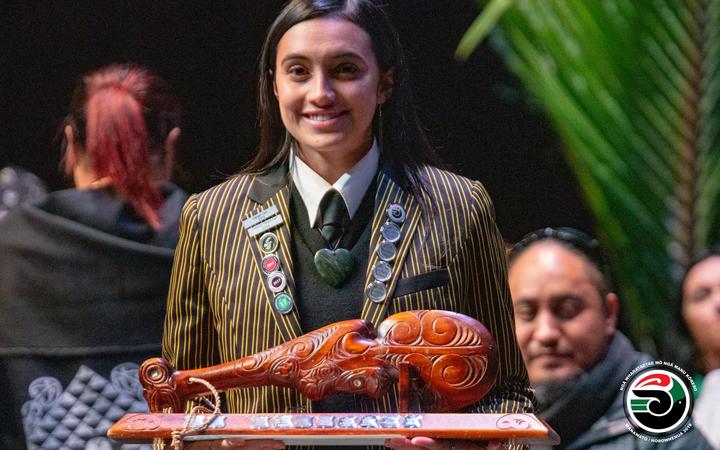 "Standing on the stage in both prepared and impromptu, I felt my tīpuna beside me, guiding me," she said.

"Coming from a rural, isolated area, it shows that no matter where you live - you can succeed. And being Māori, you can reach a pinacle of success like Ngā Manu Kōrero and other aspects of life."

Flanked by their peers and whānau, many students spoke about colonisation, te reo Māori, Ihumātao, and their growing concerns with social media and the state of the environment.

First time junior English judge and social media blogger Hana Tapiata was blown away by the depth of their kōrero.

"Just to see the range of how they all interpreted the topics and how they made it personal and just made different connections it was really mind blowing," she said.

"To see that kind of level of thinking at that age is so exciting."

She said many of the topics touched on deep and emotional kaupapa but she was pleased with how the rangatahi used light and humour to balance their speeches out.

"I was really impressed with the standard," he said.

"I have just noticed that the standard has always got sort of got higher and higher.

"It is really heartwarming and encouraging to know that there are people out there that still value the language and the quality of the language."

The two-day competition drew in 1200 spectators to Palmerston North, mostly school students there to support their speakers.

Event organiser Nick Fonotoe said attendance at Ngā anu Kōrero has been dropping for years - there was usually double that number 15 years ago.

He's putting it down to the fact that the event can now be livestreamed but Mr Fonotoe said the main thing is that people listen to what our rangatahi have to say.

"It's great to hear the voice of our youth, we can easily disregard them sometimes... but it is really invigorating to see that some of them are passionate about what they believe is right," he said.

"You can see that spark of leadership and of mana that is inherited in them. They will be the future leaders of their whānau, hapu iwi - so that part there is really exciting."

The judges noted that they were pleased to see more female speakers in this year's national competition.

Ms Netana-Williams, who took out the top prize, said she did not expect to win because the top honours usually go to the boys.