An unsafe media climate for trans athletes like Olympic weightlifter Laurel Hubbard puts the discussion of trans inclusion in sport at risk of being dehumanising and based on ill-informed fears, says an expert in transgender health. 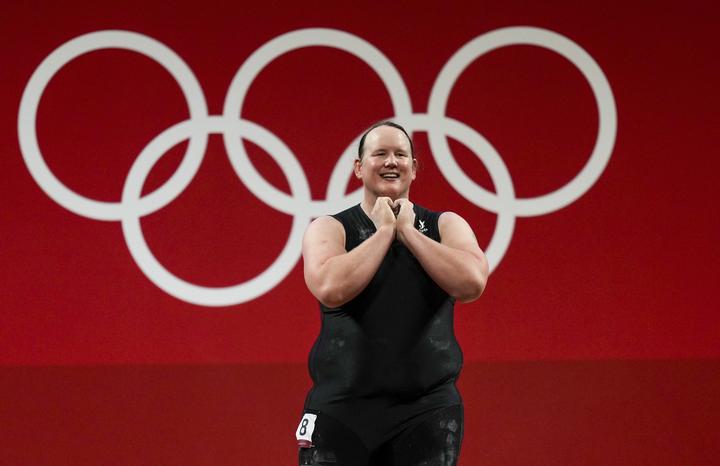 Laurel Hubbard made history at the Tokyo Olympics last night as the first openly trans woman to compete at the Games.

But the weightlifter's Olympic campaign was over quickly when she failed her three attempts in the snatch.

Making a heart gesture to the audience with her hands before leaving the competition arena, Hubbard later said her performance wasn't what she'd hoped.

She told media after the lift that she was "profoundly grateful" for her supporters in New Zealand.

She said she was aware her participation was controversial and thanked the IOC for living up to the Olympic values and showing that sport is for all.

Hubbard's participation in the women's super-heavyweight 87+kg category has been a divisive issue but the weightlifter met the International Weightlifting Federation eligibility criteria, including criteria for trans athletes set out by the International Olympic Committee (IOC).

"What's really, really important to understand here is that Laurel has completely respected the rules and has earned her spot at the Olympic Games Tokyo 2020," International Weightlifting Federation spokesperson Mark Cooper told media before Hubbard competed.

Director at the Transgender Health Research Lab at Waikato University Dr Jaimie Veale told Morning Report it's not surprising Hubbard has been keeping her head down and not engaging with media given the backlash she faced.

"Unfortunately we are seeing a climate where trans athletes don't feel safe with the media so we actually, we are missing something from the media ... we're actually missing that humanity and that courage from these media stories and I think that's a real loss to us all as it really risks the discussion about trans people's participation in sport becoming more dehumanising and often centering on these ill informed fears."

Veale said there will be so many trans women and girls who simply want to be able to play school and club sport and it's important they have role models.

"I hope there's going to be greater awareness that bodies come in all shapes and sizes and there's so many variables that contribute to sporting performance and achievement, as well as biological, psychological and social factors," she said.

"Testosterone is just one part of the of the bigger picture of what grows sporting greatness."

Other groups of women aren't singled out because of possible biological advantages, Veale said, and she hopes people will question why trans women and intersex women are singled out and scrutinised.

"Why are we policing women's bodies?"

Academic and former athlete Joanna Harper, who is trans, told Morning Report it's clear Hubbard didn't have an unfair advantage over her competition in Tokyo and says the IOC guidelines are not unreasonable.

Harper studies the physiological effects for trans women athletes at Loughborough University in the UK.

Sport isn't entirely fair, she said, but dividing sports into subcategories is an attempt to create meaningful competition.

"I believe that requiring trans athletes to lower - trans women - to lower testosterone to the same levels that other women have, while it doesn't entirely eliminate the advantages that trans women have, I think it mitigates them to the point that we can have meaningful competition."

She said trans women like Hubbard, competing in a weight class with women of a similar size, are not bigger than the cisgender women they compete against.

"I think we need to look at it on a sport by sport basis, it's pretty clear that Laurel Hubbard didn't have an unfair advantage over her competition today, given that she placed last."

While she says "it's certainly true that trans women won't lose all of the strength advantage that they gained through male puberty", she says the reality is the research into the capabilities of trans athletes is in its infancy.

One study found that trans women on hormone therapy lost their complete advantage in the number of pushups they could do in a minute, she said.

"And that's a strength based activity."

Harper hopes the Tokyo Olympics is just the beginning for trans representation in elite sport.