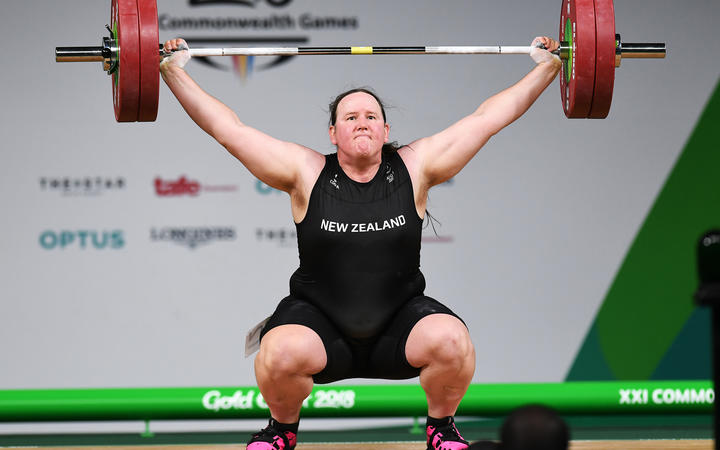 Laurel Hubbard competing at the Commonwealth Games on the Gold Coast in April 2018. Photo: Photosport

Hubbard is set to become the first openly transgender athlete to compete at the Games, after she was selected for the New Zealand team in the women's super-heavyweight 87+kg category.

The three sports organisations held a briefing for media in Tokyo today, where they discussed transgender athlete participation in the Olympic Games.

Speaking at the briefing, International Weightlifting Federation spokesperson Mark Cooper said the participation of transgender women athletes was a question of finding the right balance between inclusion and fairness.

He said Hubbard had met the required athletic performance standards as well as the IWF's transgender athlete policy, which was based off guidelines set by the IOC in 2015.

"What's really, really important to understand here is that Laurel has completely respected the rules and has earned her spot at the Olympic Games Tokyo 2020."

The IOC's medical and scientific director, Richard Budgett, supported that message saying the IWF had based its qualification rules and regulations on the IOC's scientific consensus in 2015.

"It's not for me to say whether one particular athlete has an unfair advantage or not, it's a matter of have they qualified fairly, under the rules, without cheating."

Budgett said an updated framework to help support sporting federations in setting their rules and regulations would be released in a few months time.

"I think over time as evidence comes along the standards may change... [but] you have to take the rules as they are at the time.

"Things may move on, there may be more evidence in the future," he said.

Budgett said for most people the tone of the debate was measured, calm and respectful, but there were always going to be people who take more extreme views and become less rational and scientific about the whole issue.

New Zealand Olympic Committee chief executive Kereyn Smith said it was focused on making sure that Hubbard was treated with respect was able to perform to the best of her ability.

"We appreciate that the eyes of the world are on Laurel and this competition and it's a big stage, so our job is just to make sure we do everything we can to protect her.

"I think we have to be mindful that Laurel Hubbard is a person, and she has feelings and she is eligible to do what she's doing here on the Olympic stage and we wish her all the very best."

In a statement released by the NZOC, Laurel Hubbard commended the International Olympic Committee for its commitment to making sport inclusive and accessible.

"The Olympics are a global celebration of our hopes, our ideals and our values," Hubbard said.