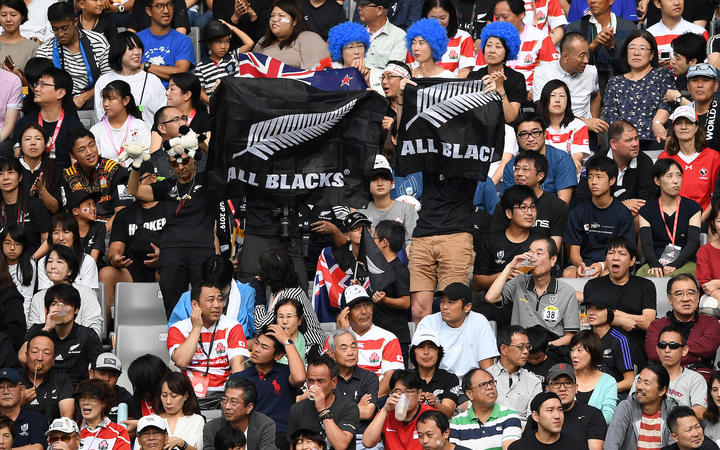 Fans and supporters of All Blacks in the match against Namibia at the 2019 Rugby World Cup. Photo: Andrew Cornaga / Photosport

Ian from Riverton and his friend had tickets to the final, until they went missing on a night out in the town.

"My mate lost his whole wallet, including the tickets, which are now very, very valuable."

RNZ previously reported that the ticket re-sale website Stubhub is selling top level tickets to the England-South Africa final for $25,687 - a 1771 percent increase on the original price of $1450.

The cheapest ticket in Category D at the International Stadium in Yokohama sold for $1113 - its original price on the Rugby World Cup website was $363.

Saturday will mark the first appearance in the final for both South Africa and England since they played each other in the 2007 decider in Paris, won by the Springboks.

The disappointment of missing out on the World Cup final still lingers for some All Blacks fans in Japan. But having come all the way to watch the former World Champions, most opted to stay on for tonight's bronze final rather than head home early.

Jason from Rotorua said he thought he was more gutted than the players, but would still head to the match tonight.

"It's pretty hard to get energised when the big goal of winning the World Cup has gone now. They [the All Blacks] say they'll be trying their hardest and, I suppose, they will be seeing off some of the boys, so I hope they can pull it all together and finish on a high." 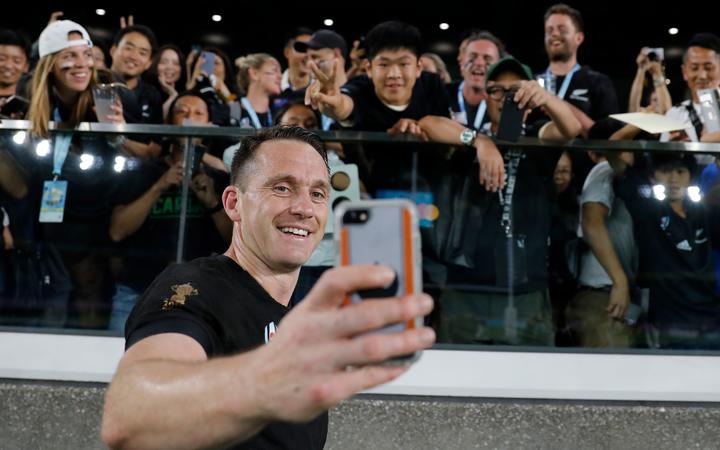 It'll be the last game for players Kieran Read, Ben Smith and Ryan Crotty in an All Black jersey and Steve Hansen's swansong as coach.

But despite losing last week's semifinal, the Welsh also have plenty to play for - it's the last game for Kiwi coach Warren Gatland, as well as the world's most capped forward, captain Alun Wyn Jones.

The two countries have met in 34 tests with all but three of those won by the All Blacks.

If you remember the last time Wales won in 1953, you might also remember Edmund Hillary and Tenzing Norgay reaching the summit of Mt Everest, or Queen Elizabeth II's crowning and her arrival to New Zealand on a royal tour.

Despite the debate about interest levels in the third-place playoff, tickets for the match have been hard to come by.

Still, the demand is even higher for tomorrow's final, according to a person that RNZ journalist Katrina Batten met this week.

"On the way over, he stopped in Malaysia and reckoned he could sell his ticket for $10,000. So he thinks that's what he is going to do."

Jason and Grendon, from Rotorua, are with a group of 10 others also trying to sell their tickets to the final.

Jason said it was just hard luck for English and South African fans saying those selling were demanding too much.

"It's a big cost coming over here for 12 days and having a good time. But we are in the hot seat, so those people should have bought their tickets, that's how the world works."

But not everyone is looking to make a few bucks.

Rich from Christchurch said he was happy to do a good deed for a mate.

"When we lost in the semifinal, I decided to gift my finals ticket to an English mate we are staying with, as I thought he'd appreciate it a bit more."

On the other hand, Katrina Batten said she certainly was not selling her tickets to the final.

"I came over here to experience the Rugby World Cup and I came knowing the All Blacks might not get through; I am a Wellington fan so I came ready to be disappointed. There's no way I am not going to go; I think it'll be an amazing atmosphere no matter who's playing."

Wade, a Christchurch musician who has been to several matches and played a few gigs during his time in Japan, said it was a trip he would forget.

"It's going to go down as the best Rugby World Cup so far, in my opinion. I have had a great time, regardless of the rugby."

Rich from Christchurch also agreed, and said there was no doubt he would go to tonight's game and cheer on the All Blacks.

"It's all about the occasion, right? Hey we can't be salty about it, we got beaten by a better team on the day and I think it is probably good for world rugby, as much as I don't like to see the All Blacks lose, three times in a row starts to lose a bit of interest."

The bronze medal match against Wales in Tokyo kicks off at 10pm. RNZ will be covering it through a liveblog.