With the disappointment of the All Blacks early exit from the Rugby World Cup starting to fade, thoughts are now turning to who might be the next All Blacks coach. 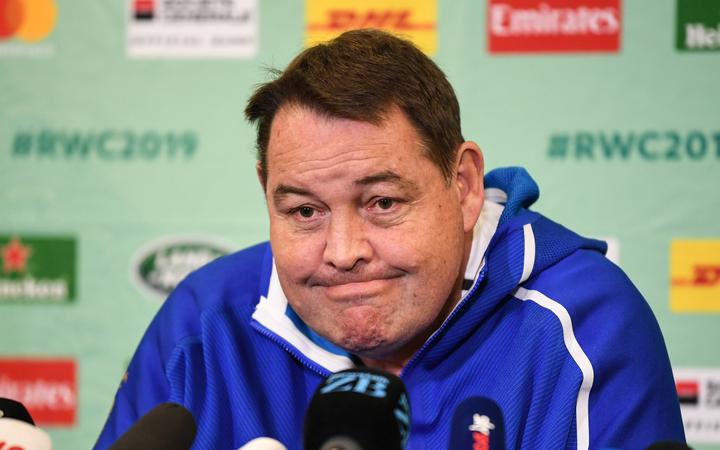 All Blacks coach Steve Hansen, who's due to step down after the bronze match against Wales. Photo: PHOTOSPORT

Steve Hansen was set to step down after the bronze match against Wales in Tokyo on Friday.

Outgoing New Zealand Rugby boss, Steve Tew, said a four member panel would interview candidates and it was hoped a replacement would be named by Christmas.

Laurie Mains knew what it was like to taste defeat at the World Cup having lost to South Africa in the 1995 final.

He said whoever took over as coach needed to have tasted defeat or to at least have experienced adversity.

"What that means is getting the very best out of a team. And clearly demonstrating the ability to build a team or rebuild a team, but showing that durability under pressure and making correct decisions under pressure, I think is is really important."

Laurie Mains said both Jamie Joseph, with the Highlanders and Dave Rennie, with the Chiefs, had picked up struggling teams and gone on to win Super Rugby titles, and should both be in with a good chance of succeeding Hansen if they wanted the job.

He rated Crusaders coach Scott Robertson, who put his hand up for the job after becoming the first super rugby coach to pick up three consecutive Super Rugby titles this year, but said it may be too soon for him to move in to the most prized job in New Zealand rugby.

"Scott Robertson's got a fantastic record, but he's still pretty young as a coach. It's not saying that he's not ready to take on the All Blacks, don't take that out of it. But he has got more time in front of him. Some of the others, Dave Rennie, Jamie Joseph, they're probably at the peak of their powers now."

The former All Blacks coach said with so many talented coaches to choose from, we may end up with a combo of two of the top candidates.

"When John Hart coached with Alex Wylie it didn't connect. When John Mitchell took Robbie Deans to the World Cup in 2003 that seemed okay when they left New Zealand but there was no victory came out of it. I think that it's got to be these days one person as the coach and a team built around him."

And while current attack coach, Ian Foster, had been talked about as a good option for the top job, Keith Quinn, thought now was the time for change, not more of the same.

"There were some guys in the current squad who had [heard] no other message [other] than that of Steve Hansen. It's time to turn a page if you like. And maybe it's the young guys of the new new breed, like Jamie Joseph, who could come into play."

Asked yesterday if he was interested, Foster said he would wait until after Friday's match before making his intentions clear.

But one who was willing to offer an opinion was star midfielder, Sonny Bill Williams.

"Be good to see I guess a Pacific Islander or a Māori in the coaching system that would have a bit of influence, because the way that the games going ... there's a lot of Island boys, a lot of Māori boys that play for the All Blacks and I'm just thinking how can we get a lot more out of those boys and I know that there is a bit of space for that growth."

Those spoken to all agreed the All Blacks were entering an exciting new phase that should see the side develop in fresh and unexpected ways under new leadership.