We know you're busy so we've been reading all the headlines at the Rugby World Cup so you don't have to. 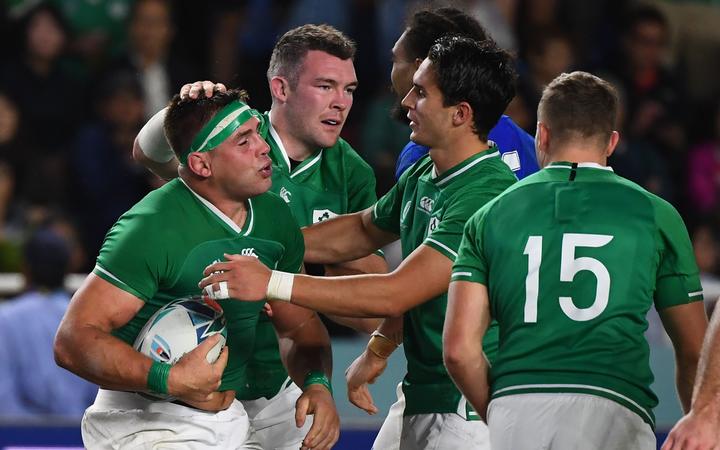 Today, we look at Ireland who the All Blacks play in this weekend's quarterfinals.

It's been a fairly ordinary campaign for the men in the green. The question is whether their forwards can exert enough pressure up front and whether the men at the back can hold out the opposition's tricky playmakers.

Most experts think this may be beyond Ireland.

But then again anything can happen in football. And we'll know in a day or after Wednesday's Euro qualifier against Switzerland in Geneva.

The first thing to know about Irish media coverage is that there's at least two big games this week - the one with the All Blacks and the football one. Could be a long week for Irish sports fans.

On the rugby match - All Blacks against Ireland in the knock-out quarterfinals at the Rugby World Cup in Japan - the Irish media are reporting many more Irish fans are heading to support their team.

"The highly anticipated game is proving a major draw for fans who are snapping up flights and even trying to swap tickets with Japanese supporters to get to the match.

"A spokesman for Emirates said the airline had "brought about 3,000 supporters from Ireland to the Rugby World Cup to date."

The Independent says the additional support could be a boost for Ireland.

Among them apparently are the wives, girlfriends and families of the players - the so-called WAGS.

"After four weeks away from home, especially for those with children, this was a timely boost for the players' wellbeing."

The Irish Times says there has been an air of inevitability about this fixture for some time now.

"And so it has come to pass, as has seemed both inevitable and a tad daunting, for the last two weeks.

"If this Ireland are to boldly go where no Irish team has ever gone before in a World Cup and reach a first ever semi-final then they will merely have to dethrone the back-to-back world champions New Zealand in Tokyo next Saturday. That's all."

Can they do it? Well, maybe, say the Irish experts.

In the Irish Independent Eamonn Sweeney argues that New Zealand-born coach Joe Schmidt will have to let his team off the leash completely to surprise the All Blacks.

Murray Kinsella, writing in The42, part of The Journal, argues that coach Schmidt may well have been holding back moves and play for this game.

"He would have been analysing the All Blacks for a long, long time and that never stops for him and his analysis team either.

"I definitely think Schmidt has held little bits back, even off scrum. You go back over the last couple of years and he has had some really inventive ones that he has probably gone 'okay, that actually worked, I'm going to tuck that away for a special occasion.' I'd say it will be a blend of both and I think it is encouraging to see the forwards carried well." 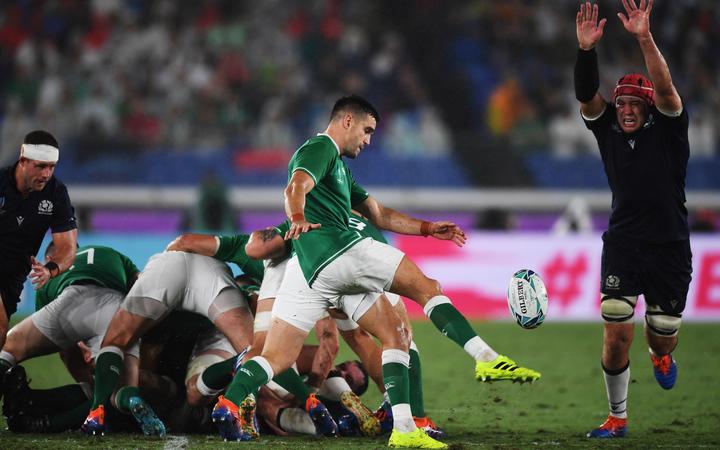 One of the repeated refrains is that there is no pressure on the Irish since they are the underdogs against the back-to-back world champions, the All Blacks.

Alison Miller in the Irish Independent argues there were subtle signs of improvement and tactics in Ireland's 47-5 win over Samoa, though the team lost its mid-fielder Bundee Aki for a red card and now banned for three weeks for a dangerous tackle.

"Forwards attacked slightly wider channels, getting out to the third defender rather than attacking very narrowly as in previous games.

"But this subtly wider attacking shape depends on halfback Conor Murray and flyhalf Johnny Sexton orchestrating it because when they left the field, we went narrower with pick-and-go and one-out runners. With the half-back change we seemed to revert to type and it showed our reliance on our front liners."

"One of the biggest positives to come from the Samoa game was that the half-back pairing were back to their influential best.

"Sexton was on the end of two tries and looked very comfortable to be back running the show. If Ireland are to build on this momentum, these two guys are key to their success and will need to be back to their world class levels to help the team along." 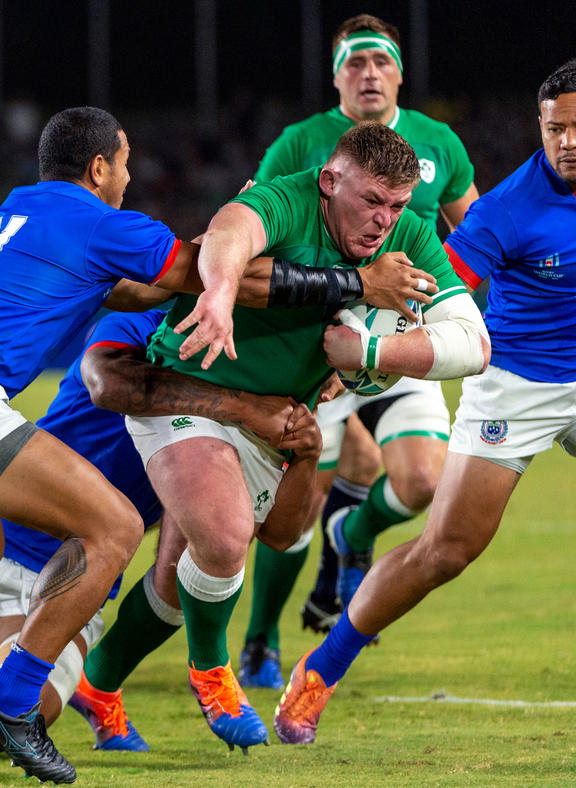 Tadhg Furlong on his way to the try line against Samoa. Photo: PHOTOSPORT

But he also points out that Ireland are not playing an expansive game, preferring to run things through their forwards.

"They like to know where the next ruck is going to be and who will be cleaning it so that others get guaranteed ball to attack with.

"This squeezes the other team and starves them of possession until they make a defensive error or until they retreat far enough for Ireland to capitalise and take some scores."

But probably the most entertaining writing is about one of the least likely stars for Ireland; Lions and Irish prop Tadhg Furlong, the man with the best first name in world rugby, scoring against Samoa.

We just couldn't leave it out, even though it is looking back to last weekend's game. Enjoy.

Having discussed how the Irish were honest toilers against Samoa, Gavin Cummiskey of the Irish Times, turns to the prop who scored a magnificent try.

"The finish deserves its place alongside Ronnie Whelan's shin shot to beat Dasayev at Euro '88.

"Murray fed the Wexford prop at full tilt moving into fellow tight head, Michael Alaalatoa, who was bumped, before Alapati Leiua attempted to rip the ball only for Tadhg Furlong to pirouette away. There was rough terrain ahead as Filo Paulo - perhaps the biggest human alive today - lined him up for an almighty wallop.

"The behemoth was unable to slow Furlong, who brought the six foot eight 122 kilogram free agent within an inch of the line. On bouncing impact with shredded grass he twisted his elbows over the whitewash."