All Blacks captain Kieran Read says all eight quarterfinalists have the skills, physicality and belief to win the Rugby World Cup. 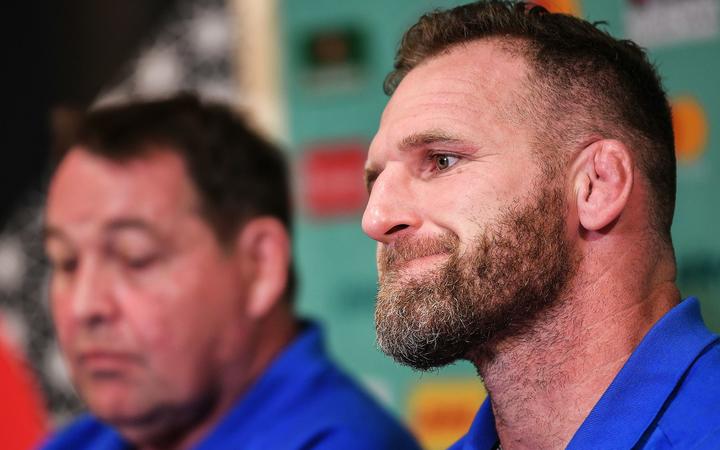 All Blacks Captain Kieran Read at a press conference this week. Photo: PhotoSport

The All Blacks will face Ireland on Saturday night in Tokyo for a place in the semifinals.

Read said knockout rugby is the ultimate leveller and while some teams are in better form than others, that won't necessarily mean those teams will win this weekend.

The teams that will progress to the final four will be the one's who're mentally strong and handle the pressure best during crucial moments in the quarterfinals.

"The eight teams are capable of winning the Cup physically.

"Mentally, it comes down to who can step up in that moment, that pressure moment when it does come, when opportunity does present itself be there and who wants to take it. It is important you acknowledge that and walk towards it."

The quarterfinals will see the All Blacks take on Ireland on Saturday night in Tokyo for a place in the semifinals. Both teams are recent number one ranked sides, though Ireland was beaten in its opening match of the tournament by Japan 19-12.

Japan, who have progressed beyond the pool stage for the first time in their history, must now play the Springboks at Tokyo on Sunday. In the other quarterfinals England will take on Australia and Wales play France. Both games will be in Oita, in southern Japan.

Read said the All Blacks will have to lift their mental game if they're to continue in the quest to win a third straight world cup.

He believes their attitude and mentality wasn't right in their last game against Namibia, which the All Blacks won 71-9, after a tough first half in which Namibia had much of the play.

Read said they'll have to be even more prepared this weekend with knockout rugby always providing unforeseen challenges to overcome.

"This is the real deal, if we don't perform, we go home.

"A reason we are here is to give ourselves a chance, so this is like week one in that quest. We are going to have to be mentally a lot stronger and step up. There are things that come with finals games and pressure is one of those. We have to deal with that."

He also spoke to reporters about what he learned from former skipper Richie McCaw, who lifted the William Webb Ellis trophy at the last two world cups for New Zealand.

Read admired his focus, determination and the mental strength required to win a world cup.

"As a person he was pretty driven. He didn't really let anything come between him and what he wanted. I learned how much mental capacity you need in the big moments."

The younger, less experienced players in the team are getting a feel for just how good you need to be to win a world cup, in terms of preparation, ability and performance.

Read said the senior players who have won the tournament before will reinforce those points this week, as they gear up for a sudden death quarterfinal against Ireland in Tokyo on Saturday, but he won't try and blunt the rookies excitement or nervous energy.

"The guys are starting to understand what it is like at the world cup and in a final. A guy coming in to their first world cup game will be just as excited as I will be. You want to keep that enthusiasm for the game."