A mouth-watering Rugby World Cup quarter-final schedule should provide answers to one of the sport's enduring questions.

Do teams get peak performance from a bye week or from regular games?

The unwelcome intrusion of typhoon Hagibis on the final weekend of pool play has created a glaring discrepancy in three of the quarter-finals.

Only the clash between the unbeaten hosts and South Africa in Tokyo pits two teams to have completed their allotment of four games.

Before that, Oita hosts England against Australia and France versus Wales, while three-time champions the All Blacks face Ireland in Tokyo.

The English, French and All Blacks are all coming off final pool games that were cancelled by the atrocious weather.

Their respective opponents all played, setting up a debate over who drew the short straws.

There can be little conjecture over the world ranking system, with the eight top-rated teams filling out the playoff berths.

Interest will continue to centre on the Japanese fairytale although they will be the biggest outsiders in any of the four games, given their comparative lack of experience and size against the thunderous Boks.

Yet the seventh-ranked Brave Blossoms have defied expectations, thoroughly deserving of wins over Ireland and Scotland. 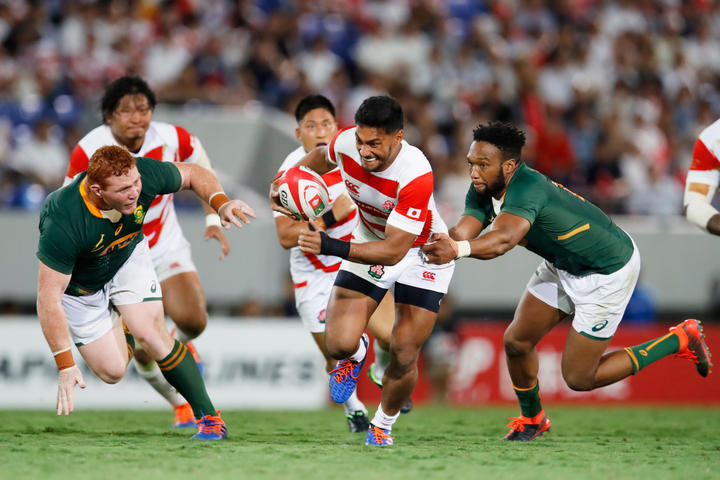 It leaves them among an elite clutch of unbeaten teams alongside top-three ranked powerhouses New Zealand, Wales and England.

Japan's triumph over Scotland lowered the curtain on the pool phase in a blaze of excitement and poignancy, the match in Yokohama falling 24 hours after Hagibis had assaulted the host nation.

The other contender for best game was the All Blacks' opening weekend heavyweight defeat of South Africa.

Wales' wins over Australia and Fiji also captured the imagination while Uruguay were the minnows who punched above their weight best.

However, the 2019 pool phase will be most remembered for the mother nature's destructive impact and the chaos it created for World Rugby.

The governing body's decision to schedule the tournament in typhoon season stirred conjecture and its intransigent approach to dealing with affected matches was panned by many, although its safety-first approach also won admirers.

The upshot is an unprecedented imbalance in the knockout phase that will forever be marked with an asterisk.

The men in white are two from two in quarter-finals against the Wallabies. More pertinently, they've reigned supreme in their last six Test meetings and will be hard to halt unless Michael Cheika's men can conjure 80 minutes of clinical rugby. It's been too patchy in pool play.

Key: Australia have a week to unearth some authority from their halves. England have that in spades and it shapes as a major point of difference.

Their only World Cup meeting was a Jonah Lomu exhibition in 1995 pool play at Ellis Park. Ireland have lost all six of the quarter-finals they've reached while the All Blacks have stumbled only once in eight visits. However, after 111 years of failing to beat New Zealand, the Irish have done it in two of their last three Tests.

Key: The Irish pack at their best can be ruthless. Something special up front could deprive the star-studded Kiwi backs of quick-ball oxygen.

It's typically about now Les Bleus awake from their World Cup slumber, or in- fighting. Six from eight at the quarter-finals stage compares favourably with Wales' one from four. The Welsh will still be haunted by their only knockout phase match against France, when pipped 9-8 in an Eden Park semi-final eight years ago.

Key: The young French side must unlock some joie de vivre. They average less than 12 points per match against the unforgiving Welsh defence in their last nine meetings.

What more do the brave blossoms have to give? After riding a national tide of sentiment to reach the last eight for the first time, they run smack into a Springboks team who won't have forgotten the humbling result in Brighton four years ago. Kenki Fukuoka against Cheslin Kolbe is an under-sized wing duel to watch.

Key: The hosts hang their hat on speed and energy. Expect the gigantic Boks to try to twist the contest into a battle of muscle.