The Rugby World Cup Pool B match between Namibia and Canada has been cancelled because of the destruction caused by Typhoon Hagibis, World Rugby said. 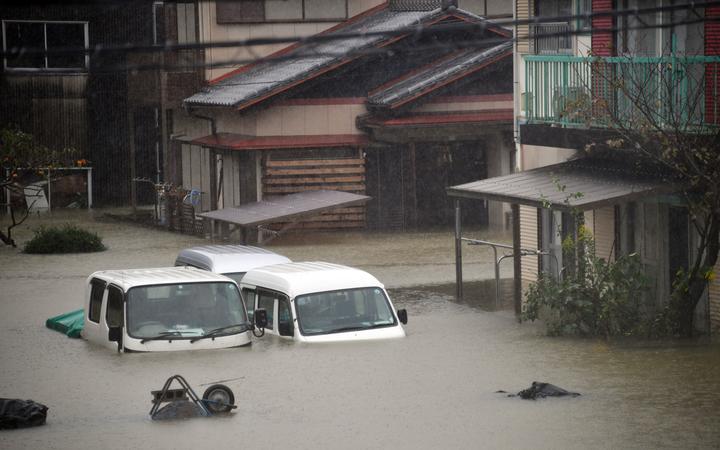 Flooding in Japan as Typhoon Hagibis lashes the east of the country. Photo: AFP

World Rugby and the Japan 2019 Organising Committee say they cancelled the match, scheduled to be contested today in Kamaishi, because the evacuation order was still in force.

The organisers said the safety of all involved in Rugby World Cup 2019 was the primary consideration. "Owing to the level 5 evacuation order remaining operational following Typhoon Hagibis, World Rugby and the Japan 2019 Organising Committee have cancelled today's Rugby World Cup 2019 Pool B match between Namibia and Canada in Kamaishi on safety grounds," the organisers said in statement.

Kamaishi is situated in a highly mountainous area, including mountains directly behind the main stand of the stadium. There have been landslides and flooding in the vicinity of the stadium and along access roads to the venue following torrential rain throughout the night.

Tournament director Alan Gilpin said in a statement: ""Our hearts go out to the teams and also their fans, but also the people of Kamaishi, who have been incredible during what has been a special journey in recent years. Nobody will be more disappointed than them, but also nobody would have better empathy with the decision."

One man was killed in Chiba, east of Tokyo, when his car overturned, while another person died after being washed away in a car, public broadcaster NHK said. Nine people remain missing in landslides and flooding, NHK said. At least 60 people have been injured.

The Namibia-Canada match, which had no bearing on the rest of the tournament with both sides out of contention for the quarter-finals, will be recorded as a draw. It is only the third World Cup match to have been cancelled.

Two of Saturday's matches, the Pool B match between the All Blacks and Italy and the Pool C decider between England and France, were scratched on Thursday when it became clear the typhoon would make landfall in central Honshu.

Organisers later confirmed the Pool C match between the United States and Tonga in Osaka and Wales's final Pool D match against Uruguay in Kumamoto and Japan's Pool A clash with Scotland - which will decide which of the two teams reaches the quarter-finals - will go ahead as scheduled on Sunday.