Eliminated Samoa's hopes of salvaging pride from a disappointing Rugby World Cup were dashed against Ireland as an all-too-familiar rash of penalties in a 47-5 loss.

While Ireland lost Bundee Aki to a red card in the 29th minute on Saturday, Samoa were unable to reap much gain as they gave up two yellow cards of their own at Fukuoka Hakatanamori Stadium while being on the wrong side of a 17-5 penalty count.

Flanker TJ Ioane went to the sin-bin for not rolling away in the second half after Samoa hooker Seilala Lam had drawn yellow for a high tackle on Jacob Stockdale early on.

That brought Samoa's total to six yellow cards across their four pool matches, twice the haul of the next most offending teams -- Australia, Fiji and Russia.

It also added to the red card given to Samoa winger Ed Fidow in the wake of two penalty tries in the defeat to Scotland, and centre Rey Lee-lo's three-match ban for a reckless high tackle in the victory over Russia. 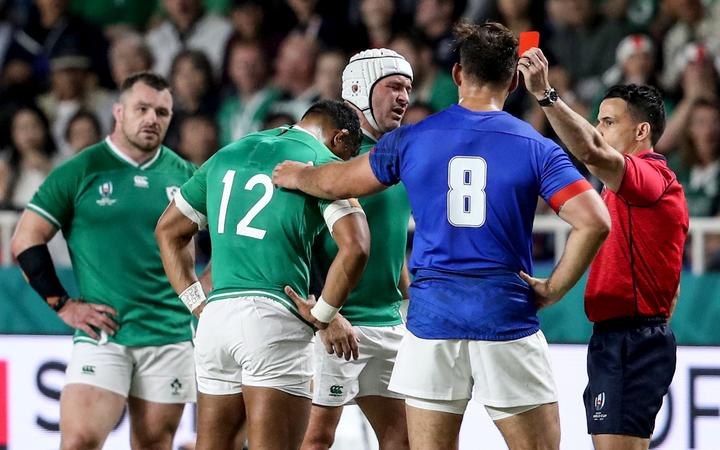 Ireland midfielder Bundee Aki is sent off in his side's win over Samoa. Photo: Photosport

"We came across a very good Ireland side tonight but, again, ill-discipline let us down," Samoa coach Steve Jackson said.

"Another 20 minutes in that game with only 14 men.

"I don't know what the penalty count was but we gave away too many penalties. We had opportunities there inside their 22 and would give a penalty away.

"They'd kick it out, get another penalty and then 30 seconds later we're defending a lineout maul right on our own line.

"So, you know, we've just got to be better than that when we come together in the future."

While Pacific neighbours Fiji and Tonga finished their campaigns strongly, Samoa went backwards after their Russia win, slumping to a 38-19 defeat against Japan before their rout by the Irish.

Jackson repeated his lament that a number of top Samoan players had chosen club over country and said he hoped World Rugby could make it easier, somehow, for Pacific islands players to compete at the global showpiece.

"It's a difficult decision, it's their livelihood," he said of the Samoans who had opted out.

"I don't have the answers... It would have been good if we were a little bit more successful at this tournament."