World Rugby has officially announced the cancellation of the All Blacks-Italy and England-France matches at the Rugby World Cup in Japan as Typhoon Hagibis bears down on the country. 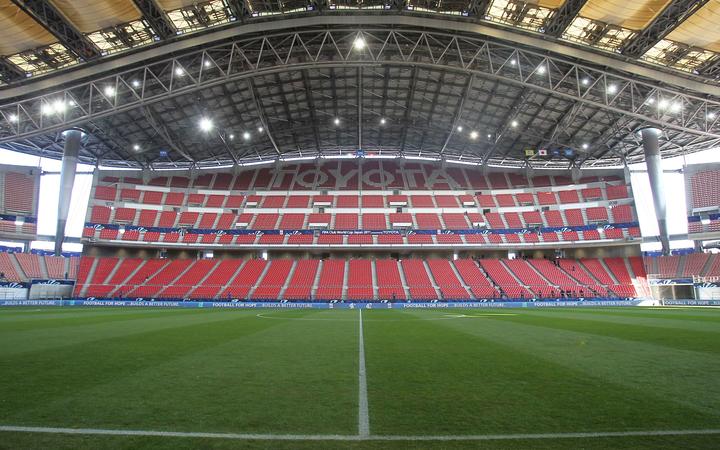 Toyota Stadium - where the All Blacks were supposed to play Italy on Saturday. Photo: Photosport

Japan's Meteorological Agency is monitoring Typhoon Hagibis, which is expected to lash southern Honshu over the weekend and could put further matches in the area in jeopardy.

These two matches are the first at a Rugby World Cup ever to be cancelled in its history since 1987.

Cancelling rugby test matches is very rare; most games go ahead in rain, snow and all sorts of inclement weather, though hardly typhoons.

There are only a handful of tests - and some first class matches - which have been cancelled or abandoned. Here's a list of them.

This match was abandoned just two minutes after the scheduled kick-off time at the Stade de France - because the pitch was still frozen.

The capacity crowd of 80,000 people were told by the PA announcer that the ground was not deemed safe for playing a game of rugby.

Eventually the French captain Thierry Dusautoir took to the PA to reassure the crowd that the game had indeed been called off.

By the time the game was due to start the air temperature was -5C.

The whole thing was described by the Daily Telegraph as one of the biggest PR disasters in the Six Nations.

It was the height of "The Troubles" in Northern Ireland and rugby became a dangerous occupation.

Ireland had beaten France and England away and turned to their home games of Scotland and Wales.

But a series of bomb threats and death threats by the IRA ratcheted up the pressure.

The games were due to be played in the wake of the burning down of the British Embassy after Bloody Sunday.

Eventually both players and authorities decided to call off the matches.

Perhaps unnoticed among the bigger matches of this year was the abandonment of the Russia v Georgia game in Tbilisi, Georgia.

The game was set to go ahead in August but Russian authorities decided that "demonstrations by radical persons" in protest against Russian political actionism meant the team would not travel to Georgia.

Georgian authorities said they could guarantee the safety of the team. Russia wouldn't budge.

There have also been first class matches which didn't go ahead.

Following the tragedy of the mass shootings in the mosques in Christchurch, the Crusaders and Highlanders decided to cancel the match in Dunedin.

Police had given the go-ahead for the game from a security point of view but the Crusaders organisation said that "all other issues and considerations pale in significance" after the loss of life.

But while the game was called off, it also began a debate on the name of the Crusaders - did it evoke the Christian anti-Islamic crusades?

In the end the Crusaders decided to keep the name.

Probably the most famous cancelled match in New Zealand history.

The Springbok tour went ahead despite massive protests against apartheid South Africa.

It all game together - police and protesters - in a massive pitch invasion in Hamilton.

After that little would be the same again - not rugby, not the tour and maybe not even New Zealand.