Super Typhoon Hagibis is bearing down on Japan, RNZ looks at what impact it could have on the Rugby World Cup. 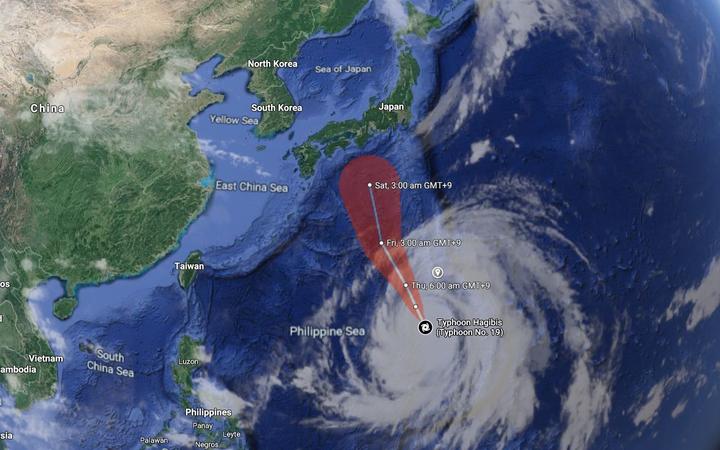 Japanese weather forecasters warn that a large and violent typhoon may cross wide areas from western to northern Japan over the weekend.

The Japanese Meteorological Agency says Typhoon Hagibis could come very close to western and eastern Japan before moving toward northern Japan on Saturday and Sunday.

Seas could be very rough from Thursday.

It is now considered a super-typhoon with winds up to around 210 kilometres per hour.

But there is still several days before the agency will know exactly where, when and in what force the typhoon could hit.

The impact typhoon Hagibis could have on the Rugby World Cup?

It could be very disruptive.

If the typhoon strikes it could cause problems for two crucial games - Ireland play Samoa in Fukuoka and Japan against Scotland in Yokohama.

The Irish need a bonus point win to guarantee their place in the quarterfinals, so if that game gets called off the Irish may not make it into the knock out stages.

Potentially it is very disruptive - it could have quite an effect on Pool A which was broken wide open when Japan, known as the Brave Blossoms, beat Ireland, one of the tournament favourites.

Another match, Wales vs Uruguay is less important as Wales have already qualified.

What happens if those games get called off?

It becomes a scoreless draw. Each team gets two points, but naturally they cannot score bonus points. Bonus points are given for scoring four or more tries.

The Irish are desperate for the game not to be called off; they want the extra points to guarantee a knock out place.

World Rugby says it has a contingency plan - it could potentially push the Saturday games to the next day or even move the games to other venues.

But everyone is taking a wait and see approach. Locals, who are experienced in these weather conditions, say that typhoons can shift direction, peter out or lose force. Everyone is counselling to wait and see.

What impact does it have on the All Blacks?

The All Blacks play Italy in Toyota City.

They say they are monitoring the situation and updating the plans as the typhoon develops.

If the game were to be washed out, they would get two points for a scoreless draw and that would guarantee them top spot in Pool B at 16 points.

South Africa got maximum points from the game against Canada last night that they won 66-7.

But if the All Black game does get washed out, they will still qualify top of their pool.

Are there disadvantages for the All Blacks if it's called off?

The big issue is time off between games.

If they don't get a game that will be two weeks between their previous match against Namibia and the quarterfinal.

That is something the All Blacks would like to avoid. Two weeks between games at this stage is a long time.

Good to get back out on the training field ✔️

What about the fans and the organisers?

Even if the games themselves don't get called off, the typhoon could cause chaos for fans, with transport badly disrupted.

Even much smaller typhoons can bring down power lines and bring down trees onto railway lines or train tracks.

Typhoons can cause disruption to the public transport system that is so vital in getting people to the game.

If a big typhoon does hit, it could be a logistical nightmare for fans and organizers as there's simply no other way of moving such vast quantities of people around.

When does World Rugby make a call on what to do?

World Rugby pretty much makes a call on game day. They will be hoping the typhoon could peter out or take another direction.

The next few days will be very much wait and see.