Wales have qualified for the Rugby World Cup quarter-finals, Scotland are still alive and Argentina have bowed out in style.

Winger Josh Adams grabbed a hat-trick of tries as a battered and bruised Wales battled to a 29-17 bonus-point win over Fiji to book their place in the quarter-finals. 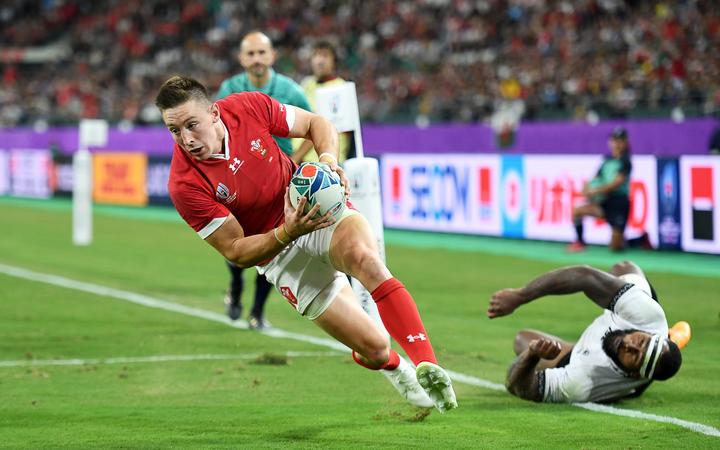 In a frenzied clash under the roof at Oita Stadium, the Fijians gave the Six Nations champions a real scare, surging into 17-14 lead early in the second half of the Pool D with a penalty try.

That revived memories of the 'Nightmare in Nantes' when the Pacific islanders knocked Wales out of the 2007 World Cup.

Adams, however, steadied the ship with his hat-trick try on the hour-mark and fullback Liam Williams crossed 12 minutes from the siren to settle the game.

Wales ended the game with concerns over talismanic flyhalf Dan Biggar, sidelined with a head injury for a second time in the tournament and who was quickly ruled out of the team's final pool game.

The result ensured Wales, with 14 points, leapfrogged Australia (11 points) to top the pool ahead of their final game against Uruguay. Fiji were eliminated after losing earlier matches to Australia and Uruguay.

George Horne scored a hat-trick as Scotland ran in nine tries in a 61-0 bonus-point thrashing of Russia to set up a crunch Pool A showdown with host nation Japan for a place in the quarter-finals.

Horne scored his first two tries from halfback and added a third from the left wing as Scotland finally got their high-octane running game going in their third match in Japan.

Five-eighth Adam Hastings, son of Scotland great Gavin, also made a significant contribution with the first two tries in four first-half minutes and eight conversions for a personal haul of 26 points.

Neither Horne not Hastings are likely to start in Yokohama on Sunday when the Scots take on Japan almost certainly needing to record a victory and deprive the hosts of a bonus point to progress to the knockout stages.

And Argentina ended a disappointing campaign on a high as they ran in seven tries to hammer the United States 47-17 with a sometimes scintillating backline display in their final Pool C game.

The Pumas, whose qualification hopes were ended by defeats at the hands of France and England, picked a young team and the newcomers took their chance to play with confidence and ambition that left the Americans clutching at shadows.

They finished third in the pool with 11 points from their wins over Tonga and the US to secure automatic qualification for 2023 but that represented a considerable step backwards for the 2015 semi-finalists, especially on the back of such an impressive Super Rugby campaign by the Jaguares.