For TV personality and mother of three, Jess Gerrity, kyūdō - the Japanese martial art of archery - is the antidote to her frantic lifestyle in Japan. 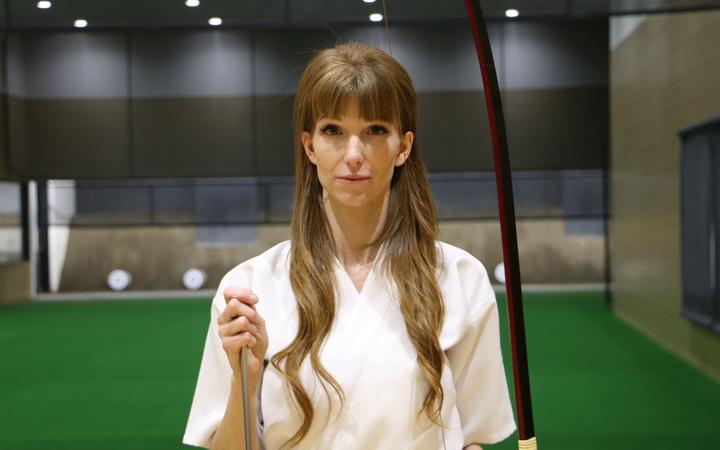 "It's so calm and so peaceful, and quiet. Which is really different to my daily life. Working is so hectic, with the kids it's hectic. Being able to do that concentration and meditation in such a quiet place... I tried it and I was hooked."

Jess Gerrity has lived in Japan for 16 years, and she first came across kyūdō 10 years ago when she noticed by chance women doing what looked to be archery in her neighbourhood.

"My image of martial arts in Japan is very male-dominated, that was my stereotype, so it was great to see women who looked amazing and powerful and really cool."

But having children made it tricky for her to get into kyūdō, as beginner courses are held once a year and if you miss the deadline you must wait until the next year.

"I went through Kyudo NZ to try to find a place in my area, someone willing to teach me because I do have the kids, and someone who could understand my schedule a little bit and teach me during the day when I was free."

Kyudo NZ introduced her to an amazing teacher in her area who she's been going to for almost two years, but her difficulty in finding a dojo to join inspired her to start a kyudo club with friends Hirokazu Kiuchi and Roy Nishizawa.

Together they founded 'You, Me and Zen', a play on words with yumi being the Japanese word for 'bow'.

They want to make the martial art more accessible to people who just want to give it a go. "We wanted to make it cheap and fun. It's very flexible and nice and proper lessons with a proper instructor."

"It lowers your stress levels so much," says Jess, "I've found it really great for helping me calm down and just taking everything as it comes. It's really fun and I'm totally addicted… it gives you inner strength and outer strength."

"It's like standing meditation, it's very good for my mind, I get peace of mind,'' Roy Nishizawa said.

"Most of our work is uncontrollable, however kyudo is controllable", adds Hirokazu Kiuchi, who has a Japan Sports Federation kyudo teaching license, and looks after first timers and beginners at the dojo.

Kyudo isn't the only thing Jess found difficult participating in after having children in Japan. After taking maternity leave with her first child, she found it tough to return to work.

"Even though the company was foreign owned, I couldn't find childcare in my area. This is a really big problem in Japan."

She says in Tokyo for example, there are thousands of children waiting for hundreds of daycare spots.

"Prime Minister Abe has said '...we want women to return to the workforce', but it's obviously missing part of the equation.

"I think he knows that. More and more facilities are being built, however there is a shortage of childcare staff. They work extremely long hours and they don't get paid enough. There may be parallels in New Zealand relating to this sort of thing as well. If it's not one thing, it's another. But it's all relating to childcare."

"The fact that the women in Japan do most or all of the housework, look after the children, cooks the dinner, and works. There are guys that don't get home until 10 or 11 at night - that's normal. So work culture, and work/life balance is very different here. That's part of the issue." 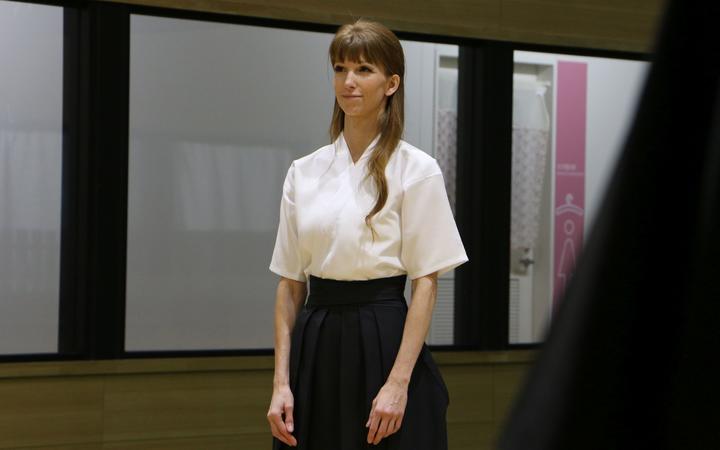 Jess was fortunate to have been introduced and signed to the biggest talent agency in Japan for non-Japanese people. Once TV shows realised she could speak the language and was good on camera, she soon became known as "the New Zealander."

"So, whenever they needed someone to talk about New Zealand, and New Zealand issues and topics, they would go through the agency and I would be put on TV."

Being a TV personality has started to become a main job for her, the hours irregular but more flexible, and she says when she's given a voice, she speaks up.

"My five-year-old was born with a disability, so we have her in a wheelchair, she can't stand or roll over or do anything like that, she is non-verbal. So, I have this whole thing about how disability is perceived.

"Their public transport system is amazing but getting on a bus with a wheelchair is not going to happen. Trains, it depends on the station if there is an elevator or not or if there are staff that will help you. It's all very drawn out and can be quite time consuming. However, it's getting better."

She says heading towards the 2020 Paralympics, Japan is trying to get every station with wheelchair facilities and access to a toileting area.

It's changing little by little, she says, but the community wants to see real follow up and societal change continue to happen beyond the Olympics.

As for the build-up to the Rugby World Cup, Jess says rugby has become more visible in Japan within the last four years. "They didn't use to show rugby on TV but now it's played every Sunday."

She says there appears to be more schools where you can get rugby lessons for younger kids, and with posters in train stations and on street lamps and banners lining the streets, it's all come into action.

"Go the All Blacks!" she yells enthusiastically.

Read here for more information on travelling around Japan.