Uruguay were not only the only amateur side at the 2015 Rugby World Cup, they lost all of their matches. 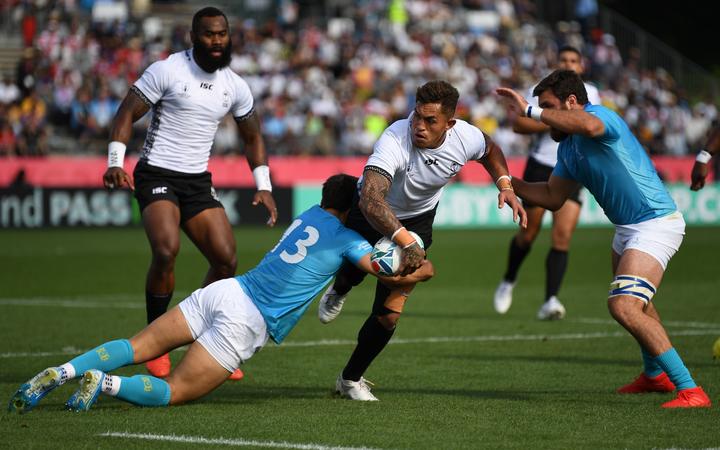 But, fast-forward four years and a raft of changes came to fruition as Los Teros beat Fiji 30-27 for the biggest win in their history.

Uruguay, who lost 47-15 to the same opponents four years ago, produced a disciplined and compact display under coach Esteban Meneses to take advantage of Fiji's mistakes and hold on for the seismic victory.

The South American side only had four professionals in their ranks four years ago but now boast 18 and captain Juan Manuel Gaminara, who was visibly emotional after the final whistle, hopes the win helps Uruguay catch up to the likes of Fiji.

"I am sure that people did not know about Uruguayan rugby.

"We are an amateur squad and a very young team... and we play against (long-term) professionals.

"Those professionals have been concentrating on rugby and training, but we are in a different condition and this is how hard it is."

"We have professionalism in our play and spirit... just not the money," said Meneses, who has been in charge of the side since 2015.

Uruguayans have benefited from the new professional Major League Rugby in the United States, with 10 players in Meneses' squad plying their trade there.

World Rugby have also praised the work of the High Performance Centre built near Montevideo in 2013.

Uruguay's Santiago Civetta in action during the team's upset win over Fiji at the Rugby World Cup. Photo: AFP

Uruguay know they will have to be patient but wins like their one over Fiji will go a long way to developing the game back home.

"All these wonderful players we have, we (still) do not have experience in international matches," said Gaminara, who still plays in Uruguay.

"But we have now proved that we can beat such a big team."

Uruguay now have four days to prepare for a physical test against Georgia.

"We participated at the last World Cup and have been developing and working hard, so this victory is a big step forward," added Meneses.

"All we have been thinking about for the last four years is beating Fiji and Georgia."