New Zealand's biggest exporter to China will get to milk the benefits of Australia's free trade deal with China, as Fonterra is a major player in the dairy industry across the Tasman. 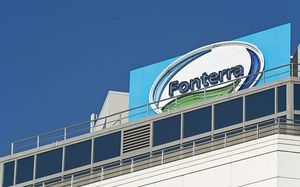 Under the agreement announced on Monday, tariffs on Australian dairy products to China would be phased out over four to 11 years and the 15 percent duty on infant milk formula eliminated over four years.

The safeguards mean tariffs are imposed once the quota limit for each product was reached.

Fonterra could tap into that benefit also, as it has about 20 percent of Australia's milk pool supplied by about 1200 farmers - its biggest source of milk outside New Zealand.

The dairy co-operative processes that milk into milk powders, cheese, yoghurts and spreads.

Fonterra said in Australia it would focus on exporting high-value speciality products into China.

Meanwhile, Federated Farmers dairy chair said Fonterra's farmer shareholders would expect its involvement in the Australian industry to outweigh any negative effects of Australia becoming a stronger competitor for New Zealand in China.

Andre Hoggard hoped that the Australian free trade agreement would help push along other, wider-ranging trade negotiatons such as the Trans Pacific Partnership talks.

"China's definitely signalling it's keen to do more free trade deals and better terms, so that bodes well for TPP negotiations and potentially an APEC negotiation.

"So hopefully, what we'll see is more action on some of these multi-lateral trade deals, because when you get all these varying bi-lateral deals they can cause a bit of distortion in the marketplace if you've got better terms here and worse terms there.

"For me, I'd love to see a really strong multi-lateral agreement - that would be great."