Australia have signed a free trade agreement with China today in which mining companies and the dairy sector are predicted to be big winners. 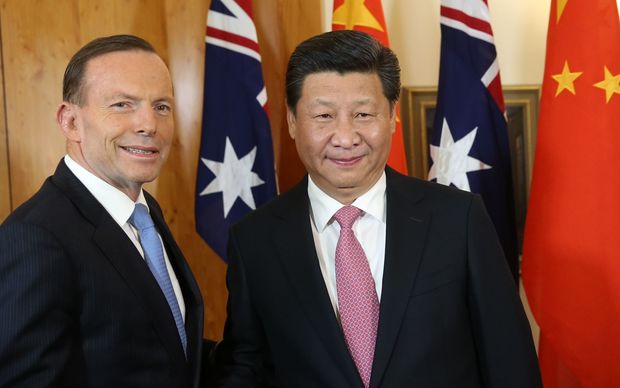 The landmark deal confirmed by Prime Minister Tony Abbott would open up markets worth billions of dollars to Australian farm exporters and the services sector while loosening restrictions on Chinese investment in the resource-rich nation.

It has been 10 years in the making and Mr Abbott would sign the deal with President Xi Jinping, the ABC reports.

Mr Abbott said dairy farmers would get a deal that is at least as good as New Zealand's.

"This is better for Australian agriculture," he said. "It's at least as good for our agriculture as New Zealand got about six or seven years ago - and their dairy exports to China have gone up from under half a billion to over three billion."

Whilst sugar and rice growers are expected to be disappointed, Agriculture Minister Barnaby Joyce said the vast majority of farmers would be better off.

Beef tariffs of between 12 and 25 percent would be phased out over nine years. Australia's beef exports to China are currently worth $A722 million.

Mining companies will also be winners under the agreement. The ABC understood that all remaining tariffs on minerals commodities such as alumina, zinc, nickel, copper and uranium would be eliminated.

The 3 percent coking coal tariff was expected to be removed immediately and the 6 percent tariff on thermal coal should be phased out within two years.

The federal opposition said it wanted to see the details before it supports the deal.