Exporters in the red meat, kiwi-fruit and wine industries are hailing the newly agreed free trade deal with South Korea.

However, the deer velvet industry says it is extremely disappointed at being excluded from the deal with South Korea, its biggest customer. 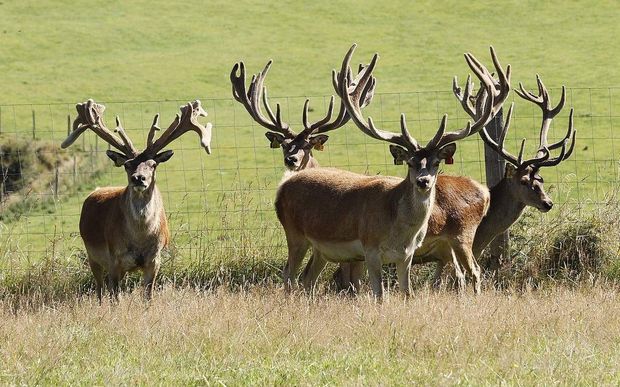 Frozen deer velvet, which accounts for 60 percent of the deer trade, has been left out of the deal. Photo: PHOTO NZ

After five years of talks, Prime Minister John Key announced the agreement at the G20 summit over the weekend.

Korea is New Zealand's fifth largest export market, worth $1.7 billion in the past year.

Maurice Crosby, who is on the Korea New Zealand Business Council and is an exporter of beef jerky, said the agreement would put exporters back in the game.

"Australia and Canada have recently signed free trade agreements and Australia in particular imports a lot of beef to Korea.

Mr Crosby said the agreement was light at the end of the tunnel and the country would get back to an even playing field.

Beef and Lamb New Zealand chief executive James Parsons said the agreement was a huge deal for his sector as red meat exporters were close to losing competitiveness.

"We were just slowly going to get squeezed out of the market because our beef was just too expensive by comparison.

"$36 million is what we paid in tariffs last year, just on beef. There's other sectors too that were paying significant tariffs," he said

The deer industry, however, is not celebrating the news. While dried deer velvet, which accounts for 20 percent of sales, is included in the deal, frozen velvet is not, even though that is where 60 percent of New Zealand's product ends up.

Industry chief executive Dan Coup said a lot of hard work had gone into building trust with its Korean counterparts.

"We thought we'd got to a situation where they were actually feeling quite supportive and not opposed to the FTA so we thought we'd done pretty much everything we could."

He said it was now clear the Korean negotiators did not see things in the same way.

However, University of Auckland law professor Jane Kelsey is warning this free trade agreement, like others, could have fishhooks. She said some deals give foreign investors special rights.

"Those rights include the ability to sue the New Zealand Government directly in off-shore tribunals, that have been hugely criticised, if new regulations or policies or actions have a significant impact on the profitability or value of the investment," she said.

The agreement still needs to be ratified by both the South Korean and New Zealand governments before it comes into force.

More on the trade deal with South Korea