The Agricultural Trade Envoy, Mike Petersen, is warning that farmers are in danger of losing out in the lucrative South Korean markets if trade talks fail.

The latest round of negotiations have been taking place in Seoul this week. 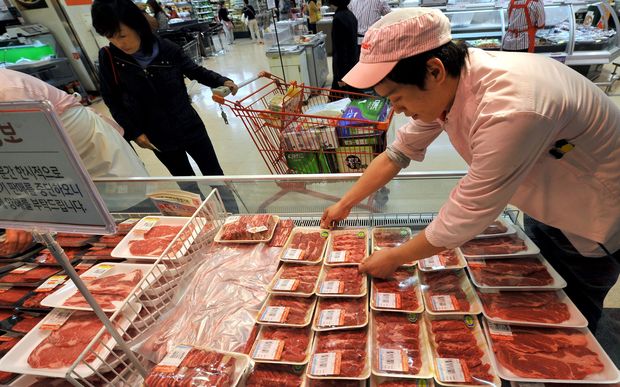 Last week the Minister for Trade, Tim Groser said he had given his final offer to the Koreans to resolve issues such as easing tariffs for New Zealand's farmers, which cost exporters $195 million a year.

Mr Petersen said Korea had signed free-trade deals with many of New Zealand's rivals, including Chile and America, and recently Australia and Canada.

He said New Zealand cannot afford to be priced out of what was an important market.

"Particularly the meat industry which is a major exporter to Korea. The Korean market's been either number three or flirting with the second biggest export market out of New Zealand for beef.

The tariff advantage that Americans currently have over other countnries, New Zealand, Canada and Australia, is about 5.3 percent. When we get to January 2015 that differential will go to 8 percent.

"And so when you look at what America's gaining as the result of having a free trade agreement, they are already jumping ahead of the rest of us.

"That's why time's critical, to get something concluded by the end of the year, because that 8 percent tariff differential on beef alone will just about make us uncompetitive in that market."