Trade Minister Tim Groser is optimistic a free trade agreement deal with South Korea can be signed by the end of the year.

The talks, which Mr Groser describes as difficult, resumed late last year after a four-year hiatus.

A main sticking point is how far South Korea will go to open its agricultural market, which levies $195 million a year from New Zealand exporters. Officials from both countries held the latest round of talks in Seoul earlier this month. 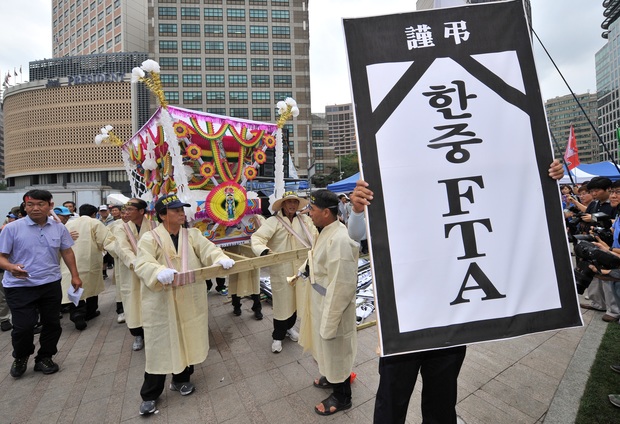 South Korean farmers and fishermen carry a coffin as they protest in Seoul in 2012 against a proposed free trade deal with China. Talks with both New Zealand and China are still going on. Photo: AFP

Trade advocate Stephen Jacobi, executive director of the International Business Forum, said it was important a deal with South Korea was concluded, or exporters could be cut out of an important market.

Mr Jacobi said said South Korea has already signed free-trade deals with many of New Zealand's rivals, and this country's exporters cannot afford to keep paying higher tariffs than them.

Mr Jacobi says any bilateral deal will be revisited if the multi-nation Trans-Pacific Partnership (TPP), which South Korea is keen to join, is successfully concluded.