About 200 people marched in Ashburton today, protesting against the council selling off a piece of land with attached water consents. 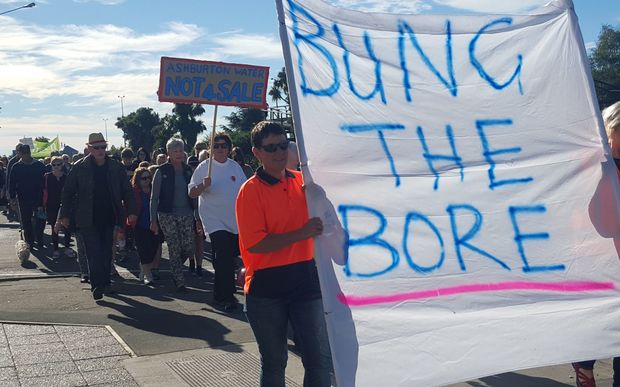 The Ashburton District Council is selling a Lot 9 in its business estate, which comes with the right to extract 45 litres of water a second from the town's aquifers for the next 30 years.

The council is not disclosing the company or how much they are selling the land for, due to commercial sensitivity.

But the council did say the interested buyer, which RNZ understood was NZ Pure Blue, was interested in setting up a water bottling plant on the site.

Donning signs and chanting 'ADC hear us roar, we call on you to bung the bore' and 'ADC hear us wail, Ashburton water not for sale', about 200 people marched from the Ashburton Domain to the council offices.

Local resident Jen Branji - who organised the protest - said she was not against the council selling the land.

"The council needs to sell the land, rate-payers paid for that business park so they need to sell it to get some money back in the coffers.

"They should not be selling the right to our water, we are in an over-allocated drought prone area. It's just crazy," Ms Branji said. 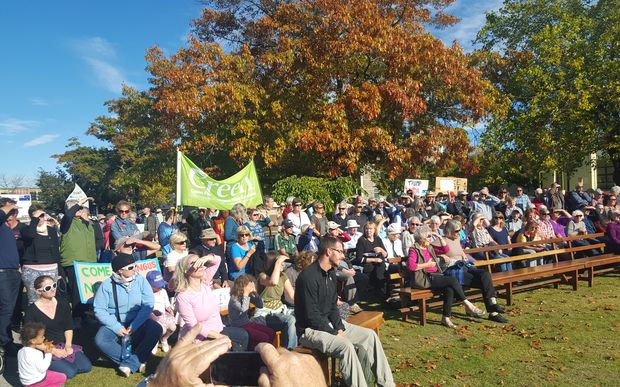 Ms Branji said the council had been doing the deal behind doors and without ratepayer consultation.

"For a small community to come out in force like that, it's just been really great. We would just like the council to respond, and we'd also like Ecan (Environment Canterbury) to respond, because we're really calling for that extraction consent to be retracted."

She said water was a depleted resource in the region and more should be done to protect it, rather than exploit it.

Local resident, Brian Box, who has lived in Ashburton for 66 years, said he thought the council should sell the land to benefit ratepayers.

He said the problem lay with the Canterbury Regional Council, who were responsible for giving out the consents.

"Ten years ago, I put a new well down, because my other well went dry. I went down 18 metres, and now the well has run dry again, and I've had to go down 54 metres to get decent water. The water is disappearing." 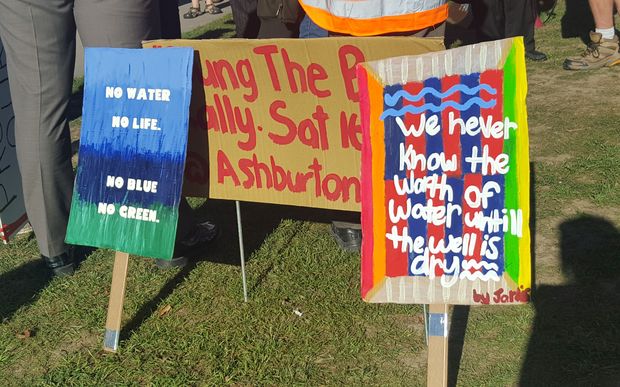 District mayor Angus McKay was not present at the protest, and only one councillor - Donna Favel - made an appearance.

"I campaigned on the basis I would listen, today the community is speaking, so I will listen.

"There is a good turnout and from listening to the speakers, I now have my own questions," Ms Favel said.

Lot 9 also has a second consent, which means it has to recharge the aquifer with 60 litres of water a second, which will be drawn from the Ashburton River.

The council expects the sale to be finalised by June.