An Auckland waste and recycling centre is remaining open today following the death of a worker at the site yesterday afternoon.

A man was crushed between the front of his truck and a bin at the Envirowaste station on Constellation Drive in North Shore yesterday afternoon. 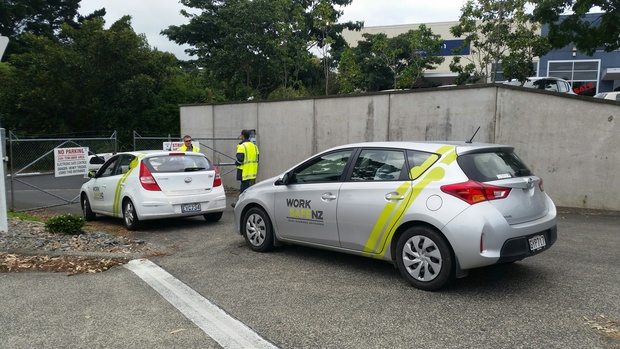 Worksafe arrive at a recycling centre where a truck driver was crushed to death. Photo: RNZ/ Joanna MacKenzie

It came only two weeks before new health and safety legislation would be brought into force.

First Union general secretary Robert Reid said that while the law did not go as far as he would have liked, he hoped it would make a difference to workers in the future.

The law would place more responsibility on employers and boards of directors to ensure workplaces were safe for staff, he said.

Envirowaste chief executive Gary Saunders said it appeared the driver had been moving a waste bin when the incident happened.

He said his thoughts and focus were around the man's family and the staff who were at the centre.

The man was not an Envirowaste employee, Mr Saunders said.

Worksafe officers attended the scene and would decide on Monday whether to conduct a full investigation.

The death was referred to the Coroner.

This was the third death in the waste and recycling industry in the last year.

Jane Lee Devonshire died after a rubbish truck she was working on overturned in Birkenhead, Auckland, last year.

Junior Hunt was crushed in his glass recycling vehicle's hydraulic lifting hoist and later died of his injuries.

Manufacturing and Construction Workers Union said Envirowaste staff had earlier raised concerns about the type of truck involved in the 20-year-old's death.