Government officials have had a change of heart on the Auckland Council's $2.5 billion City Rail Link, dropping their previous lack of enthusiasm only after the politicians decided to support it.3_news.4_web_news.publish-single 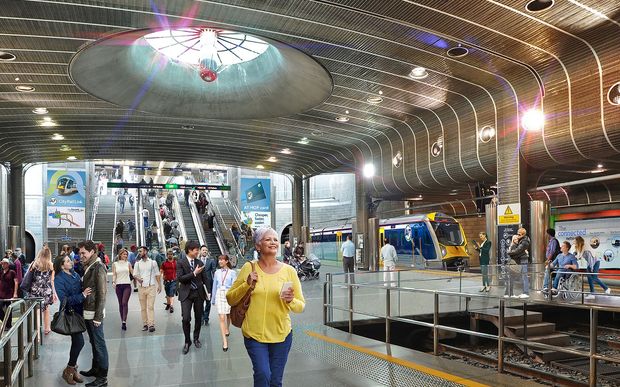 An artist’s impression of the redevelopment of Britomart Station concourse area. Photo: SUPPLIED

Papers obtained by RNZ News show officials who once saw little merit for the project starting before 2030 now support it getting underway 12 years sooner.

In July 2013, when Prime Minister John Key announced for the first time that the government backed the project, but with conditions, the Ministry of Transport was advising against an early start.

"We conclude that the evidence does not support a case for construction of the CRL by the council's desired timeframe of 2021, but that the case becomes stronger closer to 2030," said a Minister of Transport briefing dated April 2013.

Last month Mr Key went a step further, removing the previous funding conditions, and promising a half share from 2020, in a way that would give the council certainty to start building the main tunnels in 2018.

By then, a joint Treasury and Ministry of Transport cabinet briefing, released to RNZ News, showed official advisors had got in behind.

"On balance we consider the disadvantages are outweighed by the merits of enabling the Auckland Council to provide funding certainty for the project," they wrote.

The support of officials was not unconditional.

"As one of the biggest transport infrastructure projects to be undertaken in New Zealand, there are considerable risks attached to the CRL; eg cost escalation, construction and timing".

"These risks are potentially developing now given Auckland Transport's recent progress on the project," they wrote.

The papers have had the detailed list of risks deleted. The "recent progress" refers to the commencement of the shallow section near Britomart, in order to build the the first section tunnels in conjunction with a higher rise development they will pass beneath.

They also said the economic case remains weak, quoting a cost benefit analysis from 2011-12 that showed for every $1 spent, the benefits would amount to 40 cents - 90 cents.

Auckland Transport said using a different formula, the same as applied to major roading projects, the CRL would deliver $1.30 of benefit for every $1 spent.

The official advice noted a factor in supporting the earlier start is the multi-billion dollar's worth of property development planned along the tunnel route through the CBD.

Minister of Transport Simon Bridges acknowledged that the view of the government had had an influence on what the officials were advising.

"Look I think ultimately Treasury and the Ministry of Transport respond to what the government's position is," he told RNZ News.

"We have also seen the significant changes in (rail) patronage, so have they, so I think that has been a big factor there."

Asked whether the government had been lobbied by commercial property interests keen for some certainty about the timing of the project, Mr Bridges said there had been "conversations" with developers.

The government and council still have to formalise a business case, and questions of who will own what in the project, but construction will now proceed without interruption, with major works starting in 2018 and the tunnel expected to be finished by 2022 or 2023.