The government is willing to pay half the cost of the $2.5 billion Auckland City Rail Link, with the Auckland Council providing the rest, Prime Minister John Key says.

In his first formal speech of the year, Mr Key today told Auckland Chamber of Commerce the government had formalised its spending on the project, which meant it could start in 2018 - two years earlier than the current plan.

A contract was yet to be negotiated, including details about how the rail link would be owned and managed, but the government was comfortable, in principle, with a 50-50 cost split.

"Yeah look, in reality we've never really terribly shied away from that kind of number, but we owe it to taxpayers to make sure we do a good deal...to get value for money for them," Mr Key said.

"But that's the sort of order of magnitude I think we're talking about."

The government, including then Transport Minister Gerry Brownlee, has been lukewarm on Auckland Council proposals to levy road taxes, or introduce tolling to raise money for major transport projects

However, Mr Key has now left the door open for those options, as the Auckland Council looks for ways to raise money for its share of the City Rail Link.

"We haven't ruled those things out, but we have said that they would absolutely need to justify them.

"So the council, as it goes through its process of working out how it's going to come up with its $1.25 billion, will need to answer some pretty simple questions.

"How much is it prepared to fund off its rates, how much can it realistically fund through debt, what does its asset mix look like? It's got lots of options it needs to consider." 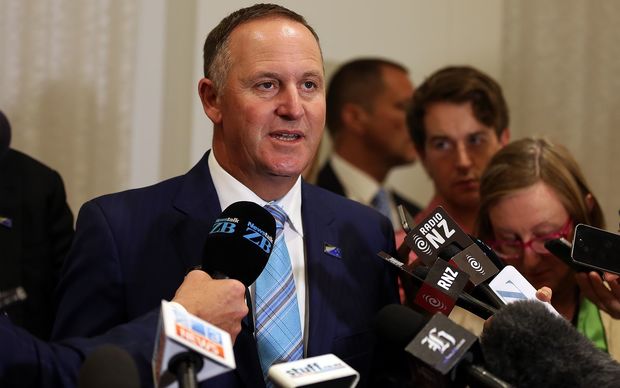 Another commitment made by Mr Key today was to streamline the consenting process for the East-West roading project in Auckland, so construction could start sooner. As well, it would have Road of National Significance status.

Mr Key was asked how that would affect people who owned the houses which would have to be removed before construction could go ahead.

"With Roads of National Significance, the only difference isn't that they can't object or that the designations can't change, it's that the timeframe means that it gets fast-tracked and you need a decision within sort of nine months.

"But historically where we've had Roads of National Significance, if you take Waterview as a good example, in the end it cost the Government as the purchaser of that project a bit more money.

"But actually the local communities got what they wanted...so look it's a big project, somewhere in between $1.25 and $1.85 billion, we need to get the thing built, actually people need certainty and we can't spend 10 years getting RMA (Resource Management Act) consent."

This was Mr Key's first major speech of the year, and there was a heavy focus on Auckland.

He was asked what message that sent about the government's priorities to voters in the rest of the country.

"Well we would argue very strongly that the amount we spend on infrastructure in Auckland, vis-à-vis the rates and the taxes that are collected here, pretty much correlate directly.

"In other words, we spend about what we earn here."

Mr Key admitted there was sometimes a "bit of an infrastructure deficit" but said that was sometimes necessary for big projects, such as the lower North Island's Transmission Gully.

"But we spend money on infrastructure right around the country, I mean $1.7 billion on ultra-fast broadband, $400 million on rural broadband, we're going to up for a new hospital in Dunedin I suspect pretty soon.