The mother of a young Nelson man whose case sparked a national debate about medicinal cannabis says the government's inaction on the issue is hurting people. 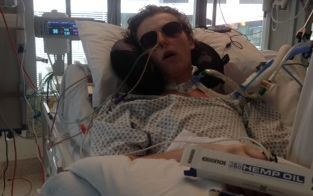 Rose Renton's 19-year-old son Alex, who had to be put into an induced coma after suffering repeated seizures, eventually received an exemption to use medical cannabis.

He subsequently died from his illness.

Alex Renton was the first person in New Zealand to be granted an exemption for the use of cannabis to treat his epileptic seizures.

But Ms Renton said the process was drawn out and far from easy. She said medicinal cannabis was only granted after a long battle with medical staff for backing, and after 43 other drugs had failed.

The Australian state of Victoria is moving to legalise cannabis for medical use in exceptional circumstances, and Associate Health Minister Peter Dunne said developments across the Tasman were not dissimilar to the situation here.

He said under the Medicines Act, illegal products can be made available with ministerial approval, if medical specialists recommend it.

"When are they going to stand up and be humble enough to say theat the laws didn't work - that they're wrong and they're actually creating harm.

"And I think the politicians know that, and yet it just takes one humble person to say people are suffering, families are suffering, and we need change."

Ms Renton said there was enough evidence to support the benefits of medicinal cannabis.

The President of the Council of Trade Unions, Helen Kelly, yesterday admitted using cannabis to help cope with the side effects of lung cancer.

She told the TV3 programme The Nation that she had used the drug to help with pain relief, but that she didn't like having to access it illegally.

Ms Kelly was planning to write to Associate Health Minister Peter Dunne to ask for permission to use cannabis legally.

"I've exhausted all of the normal medicines. I could get morphine, as much as I like, which is a horrible drug, but I would like access to cannabis oil, both because I'm interested in its curative effect, I think there's something in that ... but particularly as it's a mild pain relief."

Ms Kelly, who is stepping down as CTU president next week, said there were important drugs that would help her that she could not get through the public health system.

Yesterday Mr Dunne said New Zealand still needed to wait and see what happened overseas. He said the government would not rush into changing its policy on medicinal cannabis.