A retired Massey University scientist and plant breeder says both sick people and the economy would benefit if the government allowed medicinal marijuana to be grown and sold in the country.

Mike Nichols says there's no denying some New Zealanders are needlessly suffering because of the government's ban on growing marijuana for medicinal purposes. 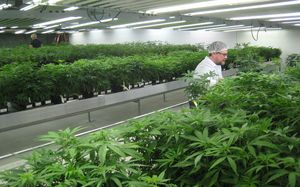 Scientist calls for medicinal marijuana to be grown in NZ. Photo: AFP

He says the government's opposition to drugs, blinds it to the economic and health benefits medicinal marijuana presents.

"Everyone thinks about cannabis in terms of the drug and the fact that it's an intoxicating type of drug. But in fact it has a lot of other properties apart from the pain relief component the THC (tetrahydrocannabinol)," he said.

He said CBD (cannabidiol) also appears to have some useful characteristics for controlling problems associated with the central nervous system.

Mr Nichols said while New Zealand is well-behind the United States in developing a medicinal marijuana market, he believes South East Asia could be a huge future export market.

He said conservative political beliefs derailed medicinal drug trials of opium poppies in Blenheim about fifty years ago, and the industry was subsequently grabbed with both hands by Tasmania.

He says Tasmania now produces 50 percent of the world's morphine and codeine.

However, a recent Health Select Committee report didn't recommend any changes to the government's current position on medicinal marijuana.

In its report the committee acknowledged the Green Party's minority view that the select committee should have been more proactive.

Among other matters the Green Party believed the Health Committee should have encouraged police not to enforce the laws around cannabis cultivation and paraphernalia for sick people using medicinal cannabis.